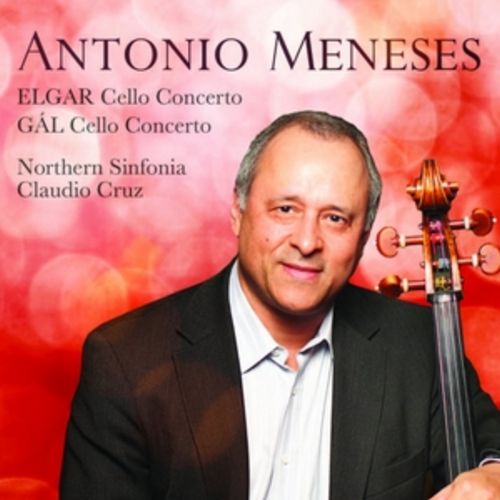 Elgar:
Cello Concerto in E minor, Op.85
n 2012, Antonio Meneses celebrates the 30th anniversary of winning the Gold Medal at the Tchaikovsky Competition, which launched the his brilliant international career and a string of acclaimed recordings including a half dozen for Avie. His latest for the label includes a couple of firsts: the world-premiere recording of the Cello Concerto by Hans Gál, and Antonios first recording of the Elgar Concerto. Bringing the Gál Concerto to light reveals the two works commonality. With beautiful, broad orchestral brushstrokes, neither is a dazzling virtuoso showpiece, rather both are lyrical, contemplative, elegiac. Both were written in the UK, Elgars in the Sussex countryside where he retired, Gáls in Edinburgh where he settled after escaping Nazi persecution in the 1930s. Elgar wrote his last major work in the aftermath of World War I, by which time his music had gone out of fashion – a circumstance difficult to fathom today. Gáls Cello Concerto was completed in the years following World War II. Throughout his long career Gál adhered steadfastly to his lyrical compositional style which was usurped by post-war modernism. Today his music is being rediscovered and appreciated anew. The Elgar regained popularity in the 1960s, the decade when the Gál was last performed. As Antonio says of the latter, “This concerto by Gál could be considered one of the greatest discoveries in a long time, at least in the cello repertoire. It is a really beautiful concerto!"
Recorded January 2012, Sage Gateshead