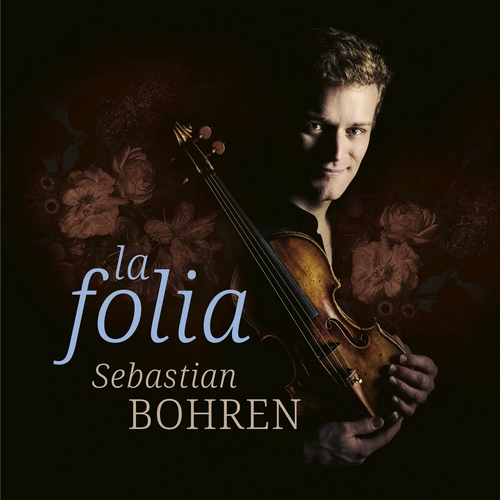 Giuseppe Tartini:
Violin Sonata in A, GT 2 .A16 (arr. Violin & strings Ottorino Respighi (‘Pastorale’ P.86))
Violin Sonata in G minor, GT 2. g05, ‘Devil’s Trill’ (arr. Violin & strings Ingolf Turban & Holger Frey)
Sebastian Bohren’s new album La folia is an affectionate homage – to Ida Haendel, one of his heroes; to fiddlers of the late 19th and early 20th centuries; and to the violin itself. The Swiss violinist says, “It is also like a hall of mirrors, as some tracks invoke the spirits of two or three violinists.” From an early age, Sebastian was immersed in a lineage of violinists who favoured Romantic transcriptions of Baroque repertoire, studying with a pupil of the great Ukrainian-born violinist Nathan Milstein. Later in life, he fell under the influence of violinist Ida Haendel on YouTube, watching her perform Corelli’s La folia variations. “She played this amazing virtuoso cadenza, and I was captivated.”

So arose the concept of a programme reflecting the ethos of La folia, the earcatching theme which has fascinated composers for centuries, from the Baroque era’s Tomaso Antonio Vitali and Giuseppe Tartini to latter-day Ottorino Respighi and Fritz Kreisler. Sebastian captures the sound world with sincerity, playing on two different violins, the 1710 “King George” Stradivarius, and a Guadagnini made in 1761.
Recorded: 3–5 May 2021 (4–11) & 7 & 8 January 2022 (1–3), Reformierte Kirche Oberstrass, Zurich. Sebastian Bohren plays a 1761 violin made in Parma by Giovanni Battista Guadagnini, the ‘Ex-Wanamaker-Hart’.