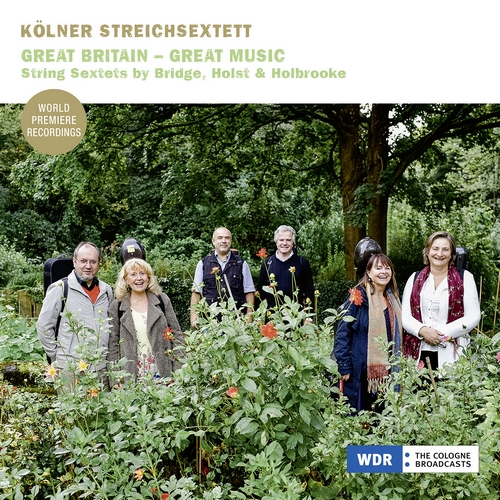 Joseph Holbrooke:
String Sextet in D, Op. 43 (Henry Vaughan)
Ironically, it was in 2017 – a year of protracted Brexit negotiations – that WDR Broadcasting suggested that we record a CD with works by British composers. Nomen est omen: certain pranksters starting calling us “the BREXTET”. We launched into the project regardless, sorting through kilos of scores on which the notes were often quite difficult to make out. In fact, we copied out separate parts from certain scores in the British Library ourselves.

After many months of research we finally agreed upon our selection: the marvellous sextets by Holst, Holbrooke and Bridge featured on this CD. In the course of our rehearsals it already became clear: we had made a lucky choice. The works exceeded our expectations. We continue to be thrilled with this music, and it has captivated our audiences: the Scherzo by Holst was even a world premiere.

Now we have arrived in the year 2019, we celebrate our 20th anniversary as a sextet and, at the same time, are overjoyed to be able to present this CD to the general public. An anniversary such as this one offers a fitting occasion to take a step back and review how our ensemble emerged and has evolved.….(Kölner Streichsextett) Music by British composers is certainly not performed or recorded very often in Germany. And British string sextets occupy an even smaller repertoire niche – for two reasons. On the one hand, the string sextet is quite a rare genre in itself. Once Luigi Boccherini had written six forerunners, the Sestetti op. 23 (1776), the sextet only truly started acquiring the status of a recognized genre toward the mid-1800s with works by Luigi Arditi (1843) and Louis Spohr (1848), then most of all thanks to the two sextets by Brahms (1860 and 1864).

Several others ensued in their wake in the period up to the First World War: sextets by Dvorák (1878), Tchaikovsky (1890), Schoenberg (1899), Korngold (1916), and others. The second reason is simply that chamber music, in general, did not play a key role in the output of the most well-known British composers of the late 19th and early 20th centuries, with the exception of Edward Elgar, who wrote a violin sonata, a string quartet and a piano quintet within a very short span of time (1918-19). Chamber music tended to be more prominent in the output of composers who were lesser known, yet not necessarily second-rate….. (Excerpt from the booklet notes by Guido Heldt)