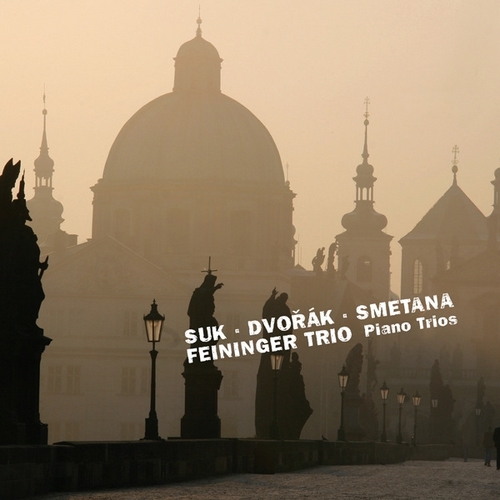 Bedrich Smetana:
Piano Trio in G minor Op. 15
Along with the string quartet and the violin sonata, the piano trio is certainly one of the most “classic” chamber music settings. Thus it is no wonder that Czech composers also wrote in that genre. The works by Smetana, Dvorák and Suk featured on this CD are characteristic examples of how the Czech late-19th-century national style was reflected in the area of chamber music.

Smetana, the “father of Czech music”, mainly wrote operas and symphonic poems, and only left a small amount of chamber music works to posterity. All three works – two string quartets and a piano trio – were written at times when he experienced a great loss. In autumn of 1855 Smetana’s musically gifted four-yearold daughter Bedriška had just passed away, and he wrote the Piano Trio in G Minor. Although the work was harshly rejected when it was premiered in Prague on 3 December 1855, Liszt (whom Smetana fervently admired) was thrilled with it one year afterwards…….

Similarly to Smetana, Dvorák’s Piano Trio Op. 26 is also in G minor, and the composer had likewise endured a hard test of fate around the time of writing. In Dvorák’s case, his daughter Josepha had died quite recently. We cannot be sure, however, whether the prevailing dark mood is biographically motivated: Dvorák himself seems to have remained quite fond of this work in later years. When it was premiered on 29 June 1879 he played the piano part himself. He then performed it several times in 1892, shortly before leaving for the United States…….

Josef Suk’s Op. 2 (fairly unknown) had been originally composed in 1889 for a recital held in the home of a Prague physician. His first composition teacher, Karel Stecker, had advised him to revise the four-movement work and reduce it to three. The work only acquired its final form after further revision on the part of Dvorák…….

In 2005, Adrian Oetiker (piano), Christoph Streuli (violin) and David Riniker (cello) formed the Feininger Trio. They named it after painter, designer and Bauhaus co-founder Lyonel Feininger (1871-1956), whose former atelier in the Berlin district of Zehlendorf was located in the vicinity of the room where the musicians now rehearse. Having known one another since their studies, the three musicians had gathered experience in the meantime as chamber musicians in other formations. All three of them wanted to apply that experience to an intense, prolonged study of the piano trio, a genre which possesses a rich, wide-ranging repertoire. They started by mastering the Classical and Romantic core repertoire, particularly the piano trios of Brahms and Dvorák. At the same time they pursued a particular interest in Modernism (Ives, Zemlinsky, Korngold). The current release featuring Czech piano trio masterpieces is dedicated to the memory of the great violinist Josef Suk (1929-2011).