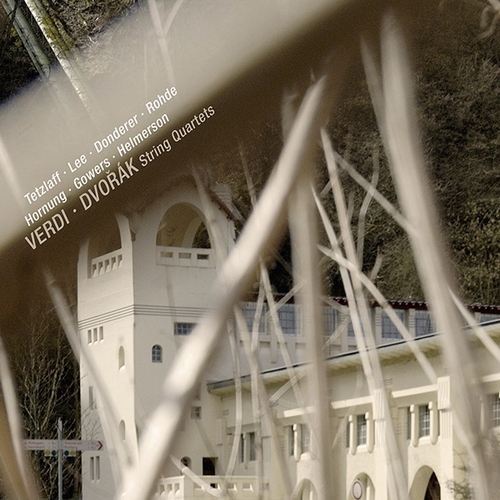 Dvorak:
String Quartet No. 10 (Op. 51)
Once again in 2015, the SPANNUNGEN Festival presented two works that reveal the great breadth of European musical culture in the 1870’s. Today we have the privilege of counting these masterpieces among the crown jewels of the period.

In 1873, Verdi wrote a string quartet – the only work of chamber music in his entire output. It was intended to serve as a pastime during a long stay in Naples. Only later did he make clear to the world that he was not indifferent to this work’s quality. 6 years later, Dvorák wrote his 10th String Quartet.

Thus, this CD juxtaposes the Romantic styles of Central Europe and the Mediterranean. SPANNUNGEN Festival makes it possible for us to enjoy such live concert recordings featuring firstrate, world-renowned chamber musicians: one can listen to each string quartet for itself, or as a contrasting pair.

SPANNUNGEN means “Tensions”; this chamber music festival takes place in the acoustically superb turbine hall of a hydroelectric power plant, and tensions are also what the emotionally charged musical interpretations at this event promise. On this recording, the musicians play their string instruments “on the edge of their seats”, with passion and commitment. Thus, these two live quartet recordings are spectacular snapshots of a thrilling musical festival that is truly one-of-a-kind.