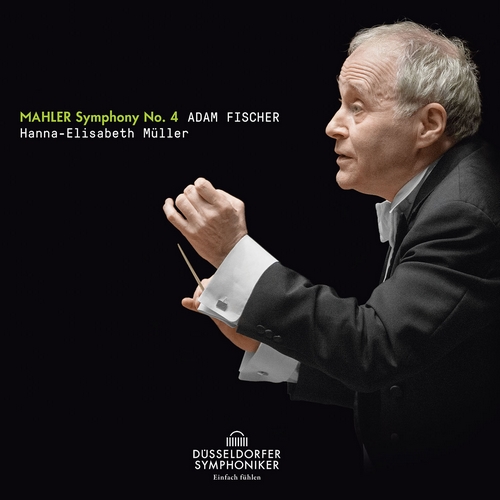 Symphony No. 4 in G Major:
I. Bedachtig. Nicht eilen
II. In gemachlicher Bewegung. Ohne Hast
III. Ruhevoll
IV. Sehr behaglich
“I am delighted to perform and record the complete symphonies of Gustav Mahler with the Düsseldorfer Symphoniker. The result, we hope, should be something special: a rendition that stems from an active collaboration in which we mutually inspire one another. This should not be “my” Mahler, but “our” Mahler…

The Fourth is Mahler’s most transparent and lyrical symphony – almost a chamber symphony. Probably also due to its rather reduced format, it has been received in unique and contradictory ways. Even during the time when international audiences had practically no knowledge of Mahler’s music, the Fourth remained relatively popular. Today it is regarded as less impressive than the First, Second, Third, Fifth and Sixth Symphonies; from my point of view, however, this stems from an unacceptable misunderstanding. Stylistically, the Fourth poses a truly special challenge I find quite exciting. It is Mahler’s “Pastoral Symphony”.

The musical style of the Vienna Secession movement tended to integrate elements of Viennese musical tradition into purely classical works. Many listeners did not take that tendency seriously and branded it as harking back to overbaked ideas (I overheard statements to this effect when I was a child). Of all Mahler’s symphonies, the Fourth is perhaps the one where he puts those Viennese elements most clearly on display. I once even heard the cruel remark that Mahler’s Fourth Symphony amounted to nothing else than the expression of his sadness for not being Schubert. Frankly, this music is everything else but a Schubert imitation. Much of Schubert – and of Haydn – admittedly does resurface here, along with typical Viennese effects including a particular kind of glissando, for instance, and those stylistic means are one of the Fourth’s essential elements. We should therefore perform them in a way that makes them quite noticeable.
Recording based on live recordings on 17 - 21 November 2016, Tonhalle, Düsseldorf, Germany