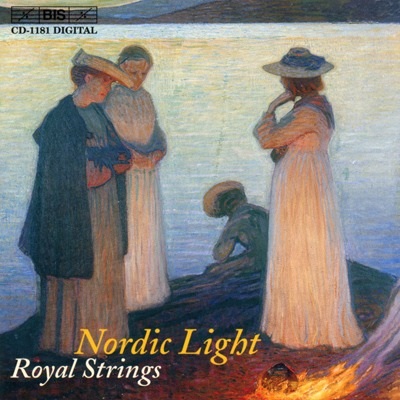 Bis - BIS 1181
Kompozytor
Edward Grieg (1843-1907)
Carl Nielsen (1865-1931)
Jean Sibelius (1865-1957)
Hugo Alfvén, Hugo Alfvén Ole Bull, Fini Henriques, Lars-Erik Larsson, Dag Wiren
Wykonawcy
Strings Of The Royal Stockholm Philharmonia Orchestra / Magnus Ericsson
Nordic Light
Gösta Nystroem (1890-1966) is one of the leading Swedish symphonists of the past century. His musical gifts were obvious from an early age but so were his considerable talents as a painter. For periods of his life in Copenhagen and Paris he made a living as a portrait painter. It was only at the age of 35 that Nystroem finally decided to take up music and composing as a career. Though he continued to make painting trips and it was just such a visit to the Mediterranean which provided the inspiration for Sinfonia tramontana. This symphony, his sixth, was named after the wind that sweeps across Provence from 'beyond the mountains'. Another of Nystroem's interests was literature; Shakespeare, in particular, being a great source of inspiration. From incidental music that he wrote for a stage production of The Tempest he went on to create this colourful Sinfonia shakespeareana, in which each movement was inspired by a Shakespearean quote. A distinctive voice with a listener-friendly range of expression!
Release: Dec 2000