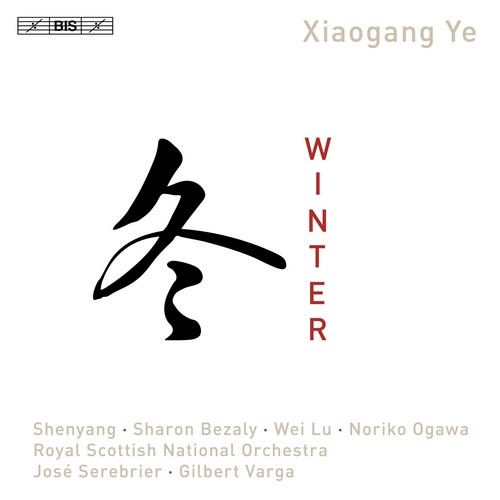 The Song of Sorrow and Gratification, Op. 67
December Chrysanthemum, Op. 52b
Winter, Op. 28
The Brilliance of Western Liang, Op. 16
Starry Sky, Op. 56
'As intriguing as it is beguiling' was how the 'east- meets-west soundworld' of Xiaogang Ye was described in the BBC Music Magazine on the release of a previous disc of his orchestral works in 2016. On that occasion Ye's music was championed by Jose Serebrier, who returns here, sharing the task with Gilbert Varga. Between them they conduct the Royal Scottish National Orchestra and four international soloists in five works which highlight the beginning of Ye's career as well as his more recent works. The Brilliance of Western Liang was written in 1983, during Ye's time as a student at the Central Conservatory of Music in Beijing, and is named after a fifth-century kingdom in northwest China. Five years later, Ye wrote his Op. 28, Winter for orchestra, shortly after the he had gone to stay in the U.S.A.

A wintry theme returns in December Chiysanthemum (2006), composed in memory of Ye's daughter Nini, who passed away as an infant. Two years later, Ye was given the prestigious task of writing a work for the opening ceremony of the Beijing Summer Olympics. His Starry Sky for piano, chorus and orchestra, was performed for a worldwide audience with Lang Lang at the piano. The most recent work on the disc is The Song of Sorrow and Gratification (2012), a cycle of four orchestral songs dedicated to the bass-baritone Shenyang who also performs them here. The work sets texts by Li Shutong (1880-1942), assembled from early poems reflecting the resentment, melancholy and helplessness experienced by a young man during a period of turmoil in the history of China.
Recording: August 2018 (tracks 1 4, 7) and August 2016 (5, 6 & 8) at the RSNO Centre & New Auditorium, Glasgow Royal Concert Hall. Instrumentarium: Flute: Muramatsu 24k All Gold Model, No. 60600; Violin: Giuseppe Rocca, Turin 1843; Piano: Steinway D.