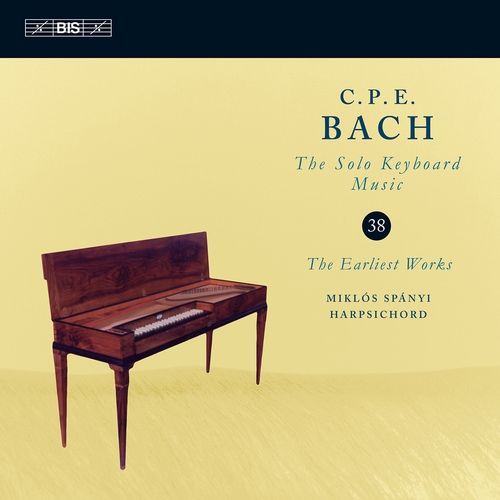 Sonata (Suite) in G major, Wq/H. deest
Three pieces from Anna Magdalena Bach’s Clavierbüchlein
Menuet in E flat major, Wq/H. deest
Suite in E flat major
Movements in G major
Suite in E minor, Wq 65/4 (H 6)
Cantabile in E minor
Menuet in C major, Wq 111
March in E flat major, BWV Anh. 127
Variations in G major on a Menuet by Locatelli, Wq 118/7 (H 14)
Carl Philipp Emanuel Bach was more systematic than many of his composer colleagues when it came to keeping track of his own works and made at least two catalogues of his compositions for solo keyboard. At various times he also destroyed manuscripts that remained in his possession, especially those of early works. But even so, there are a number of pieces that slipped through the net, and several of them can be found on this disc. A few of them were included anonymously into the second Clavierbüchlein for Anna Magdalena Bach, while Emanuel Bach was still living in his father’s home in Leipzig. Among the pieces are some that have been identified as being by Bach only recently, during the ongoing work of producing a printed edition of the composer’s complete works.

As devised by Miklos Spányi, the programme is a colourful mix of brief dance movements and other miniatures, provides both variety and insights into the formative years of the composer. It ends with Bach’s Variations on a Menuetby Locatelli, the most technically demanding of his variation sets composed in 1735 when he was a young man of 21.
Recording: July/August 2017 at the Christuskirche, Sankt Ingbert, Germany. Instrumentarium: Double-manual harpsichord built by Gebrüder Ammer (Eisenberg, Thüringen) in 1948 inspired by German harpsichords of 18th c. Płyta wydana w opakowaniu BIS ekopak.