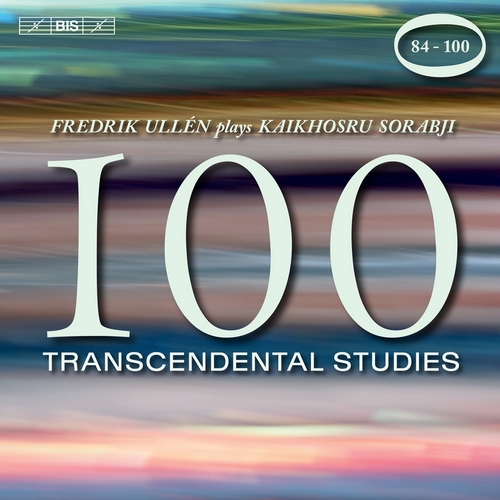 CD 2:
99. Quasi Fantasia
(Nello stilo della fantasia cromatica di Giovanni Sebastiano)
100. Coda-Finale. Fuga a cinque soggetti:
Parte prima a due voci - Soggetto primo
Secondo soggetto a 3 voci
Terzo soggetto a 4 voci
Quarto soggetto a 5 voci
Quinto soggetto a 6 voci
Stretto maestrale — Libero quasi cadenza con punta d’organo —
Pieno - largo e maestoso. Quasi Organo pieno
By far the largest collection of concert études in the known repertoire, Kaikhosru Sorabji’s set of 100 Transcendental Studies, composed between 1940 and 1944, has a total duration of more than eight hours. On five previous discs, the Swedish pianist (and neuroscientist) Fredrik Ullén has introduced the first 83 études to a wider audience, the large majority of them appearing on disc for the first time. Now, 15 years after the release of the first volume comes the final instalment, a 2-disc set with the last 17 studies. In his own liner notes, Ullén describes the experience of learning and recording the collection: ‘From the F sharp minor of Study 1 to the F sharp minor chord concluding Study 100: traversing Sorabji’s Transcendental Studies has been somewhat like joining a comet following a long eccentric orbit through pianistic outer space, and finally returning back to mother earth.’

Most of the studies are typical concert études in the sense that they essentially explore a single technical or structural idea. But especially towards the end of the cycle Sorabji includes pieces that are on a much larger scale, a tendency that culminates with the two final études. Quasi fantasia (No. 99) is a hugely expanded elaboration of J. S. Bach’s Chromatic Fantasia and is followed by the almost hour-long Coda-Finale, a quintuple fugue of staggering complexity. Besides the programme notes by Fredrik Ullén, the CD booklet includes texts by Kenneth Derus and Alistair Hinton who both knew the composer.