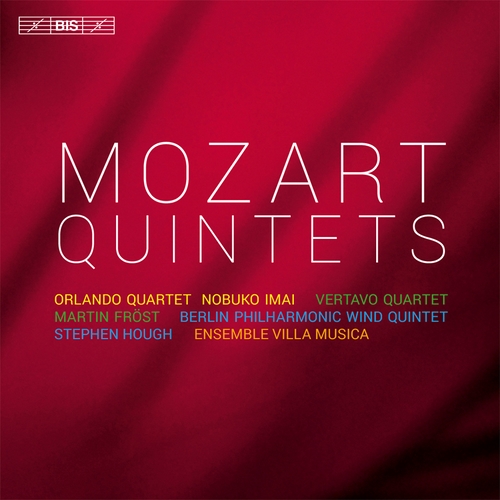 Quintet in E flat major for piano and winds, K 452

Quintet in A major for clarinet and string quartet, K 581

Quintet in E flat major for horn, violin, 2 violas and cello, K 407
Mozart's string quintets, and particularly the last four (K 515, K 516, K 593 and K 614) are often cited as being among the finest examples of his chamber music. The musicologist Charles Rosen has drawn attention to the fact that the quintets always appeared shortly after the completion of a series of quartets, as if the medium represented a more ideal and final realisation of the composer’s musical thoughts. It is not, however, a question of quartets with a fifth, ‘extra’ part. Even the early K174 possesses a striking complexity, and as a group the quintets employ a great variety of textures: dialogues between two instruments with three-part accompaniment from the others, the alternation of two string trios (two violins and viola or two violas and cello), or violin duets, alongside viola duets, accompanied by the cello. The performances of these intricate masterworks by the Orlando Quartet and Nobuko Imai, have been highly regarded ever since their original releases and were for instance described as 'magisterial and gripping' on AllMusic.com. They now appear in this box set, accompanied by a fourth disc which brings together three further Mozart quintets for varying constellations: the charming Horn Quintet from 1782, the extraordinary Clarinet Quintet from seven years later and the Quintet for piano and winds which Mozart in a letter to his father in 1784 described as 'the best thing I have written so far'. Performing these works here are eminent musicians including Radovan Vlatković, Martin Fröst and Stephen Hough
Rec. 1989-2004