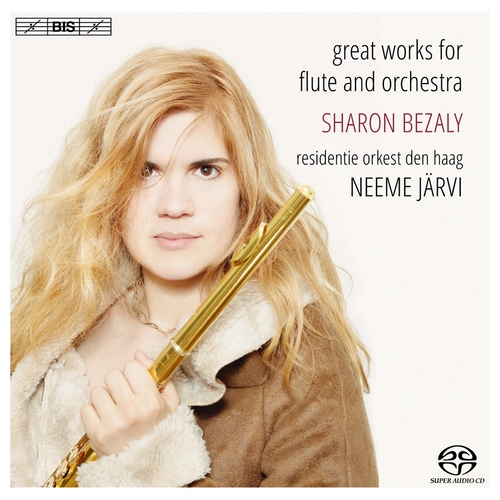 Carl Nielsen:
Concerto for Flute and Orchestra, FS 119
Charles Tomlinson Griffes:
Poem for Flute and Orchestra (1918)
Carl Reinecke:
Concerto for Flute and Orchestra in D major, Op. 283
Cécile Chaminade:
Concertino for Flute and Orchestra, Op. 107
Pyotr Ilyich Tchaikovsky:
Largo and Allegro for flute and strings (1863–64)
Francis Poulenc:
Flute Sonata (1956–57)
Nikolai Rimsky-Korsakov:
The Flight of the Bumblebee (1899–1900)
One of today’s most highly respected exponents of her instrument, Sharon Bezaly is a staunch champion of contemporary music, with 17 concertos and numerous chamber works dedicated to her. But she has also made acclaimed recordings of flute repertoire mainstays, from Mozart’s concertos and quartets to Joaquín Rodrigo’s Concierto pastoral. Her latest disc includes two central works from the repertoire for flute and orchestra – the concertos by Carl Nielsen and Carl Reinecke – as well as less often heard gems, such as Cécile Chaminade's melodious Concertino and Charles T. Griffes’ Poem, with its distinctive harmonies and colourful writing. The programme also includes a true rarity in Tchaikovsky’s youthful Largo and Allegro for flute and strings, written while the composer was still a student at the St Petersburg Conservatory. The work was originally composed for two flutes and strings, but as the second flute plays for just 17 of the total of 87 bars, either doubling or filling in when the first player is silent, the two parts have here been combined into one. In contrast, Poulenc's Sonata is of course one of the most popular pieces in the flute repertoire of the 20th century, but it is here performed in an unusual version for flute and orchestra, orchestrated by the British composer Lennox Berkeley, incidentally a friend of Poulenc. Throughout this colourful and varied programme, Sharon Bezaly enjoys the sympathetic support of Neeme Järvi and the Residentie Orchestra who also join her in the spectacular encore, the Finnish composer Kalevi Aho’s virtuosic arrangement of Rimsky-Korsakov's The Flight of the Bumblebee.