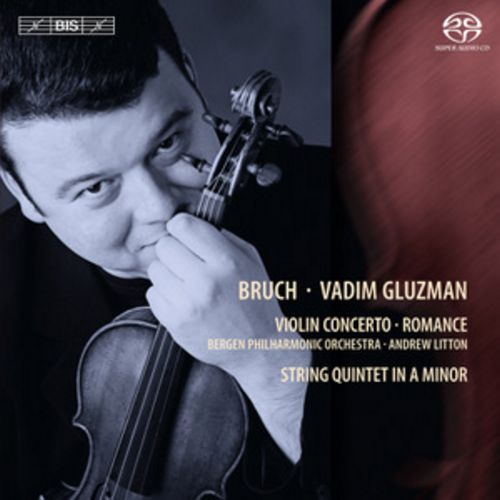 Bruch: Violin Concerto No.1, Romance, String Quintet in A minor

Concerto No.1 in G minor for Violin and Orchestra, Op.26
Romance in F major, Op.85 (orig. for viola and orchestra)
String Quintet in A minor, Op. posth. (1918)
Throughout his 82-year life, Max Bruch remained true to the musical ideals of his youth, formed by Schubert, Mendelssohn, Schumann and German folk songs. As a result, the same composer who in the 1880’s was regarded as Brahms’ equal, by the time of his death in 1920 was considered an anachronistic irrelevance. Nowadays, however, few would deny that his production includes numerous works of exquisite sonority, beautiful melodiousness and admirable formal cohesion: a glorious irrelevance indeed. His Violin Concerto No. 1 was a spectacular success from its first performance in 1868, and soon won over audiences both in Germany and abroad. In fact, it became so popular that Bruch in later years became increasingly worried about being considered a ‘one-hit wonder’. It is thus a staple of all violin soloists that Vadim Gluzman here takes on, after his recordings of the concertos by Tchaikovsky (‘without doubt one of the work's finest recordings in recent years’, BBC Music Magazine), Barber (‘one of the most beautiful and characterful recordings of this work’, klassik-heute.de) and Korngold (‘Gluzman’s playing lends the work a new vitality and cohesion’, Classica). Supported by the eminent Bergen Philharmonic Orchestra and its music director Andrew Litton, Gluzman couples the work with a rarity, a violin version of the Romance in F major, Op.85, composed by Bruch for viola and orchestra almost 35 years after the violin concerto. The composer also made an arrangement for violin and piano, and it is this violin part which Gluzman performs to the original orchestral score. Closing the programme is the String Quintet in A minor in which Gluzman is joined by four eminent string players: Sandis Šteinbergs, Maxim Rysanov, Ilze Klava and Reinis Birznieks. Composed in 1918, the Quintet certainly offers no indication of being the exact contemporary of modernist works such as Stravinsky’s Histoire d’un soldat; on the other hand its almost youthful energy, dramatic instinct and playful exuberance equally belies the fact that it was composed by a man in his eightieth year