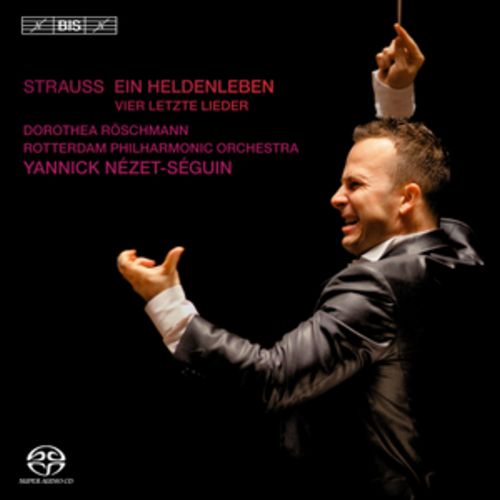 Ein Heldenleben, Op.40
Vier letzte Lieder (1946–48)
The first recording by Yannick Nézet-Séguin and the Rotterdam Philharmonic Orchestra for BIS centred on Berlioz’ Symphonie Fantastique, a work which stands squarely on the threshold between Classicism and Romanticism. Nézet-Séguin’s interpretation brilliantly demonstrated this ambivalence, as the reviewer in CD Review on BBC Radio 3 remarked: ‘A Fantastic Symphony that relishes in the transparency and the delicacy of Berlioz's scoring while remaining true to its vivid imagination and dramatic punch’. On the follow-up to that exciting release is another work that straddles a musical divide, namely Richard Strauss’ Four Last Songs. Composed in 1948, these late blooms of an unabashed Romanticism stood in the midst of a musical landscape which featured the twelve-tone serialism of the Darmstadt School, John Cage’s prepared piano and the first examples of musique concrete. In accordance with Strauss’s wish, it was the dramatic soprano Kirsten Flagstad who first performed the songs, but they also became closely associated with Elisabeth Schwarzkopf. On the present recording, it is Dorothea Röschmann, one of today’s foremost Mozart sopranos who lends her voice to what is often regarded as an expression of the composer’s acceptance of death’s inevitability, at the age of eighty-four. We meet Strauss in a completely different mood in the disc’s opening work – the large-scale symphonic poem Ein Heldenleben (A Hero's Life) composed fifty years before the songs. By casting himself in the role of the Hero, Strauss managed to provoke generations of music-lovers for years to come. A study of aggressive egotism, the work has been called, as well as the most conceited piece of music ever written. But it is also widely regarded as one of the most brilliant, and virtuosic, orchestral scores in the history of music, displaying the possibilities of a large symphony orchestra to the fullest.