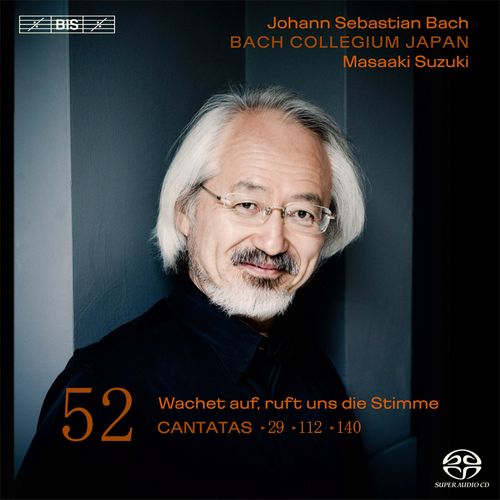 Wachet auf, ruft uns die Stimme, BWV140
Der Herr ist mein getreuer Hirt, BWV112
Wir danken dir, Gott, wir danken dir, BWV29
On the 52nd disc in his monumental undertaking of recording all the sacred cantatas by J.S. Bach, Masaaki Suzuki includes one of the best-loved cantatas of all, Wachet auf ruft uns die Stimme, BWV 140. With the famous chorale as the unifying element, Bach creates a majestic first movement which is followed by a couple of the most beautiful love duets in the history of music, between the Soul and Jesus, here interpreted by the soprano Hana Blažíková and Peter Kooij, bass. Following BWV 140 on the disc is Der Herr ist mein getreuer Hirt (‘the Lord is my faithful shepherd’), in which an adaptation from 1531 of the famous Psalm 23 provides the text for all five movements. It is thus a late addition, composed in 1731, to the so-called chorale cantatas that Bach composed a number of in 1724-25. The final cantata in this volume was composed for a church service celebrating the inauguration of a new city council, a ‘Ratswahl cantata’. For this unusually festive occasion Bach clearly wished to demonstrate to the Leipzig notables how sacred music was flourishing under his direction and to present himself as a composer. As a result, the opening sinfonia is a brilliant organ concerto movement, while the first chorus is a reworking of material which Bach would return to in the Dona nobis pacem of his Mass in B minor. The ending of the cantata is suitably splendid and festive, with trumpets and timpani joining in the praise ‘unto God the Father, Son and Holy Ghost’ expressed in the closing chorale. As this recording project is nearing completion – three more volumes remain to be released – reviewers worldwide are commending it for its consistently high standards, with the German web site Klassik Heute remarking that Suzuki ‘not even towards the end of his marathon is showing any lack of freshness or breath – one can only wait impatiently for the final discs of this series’.