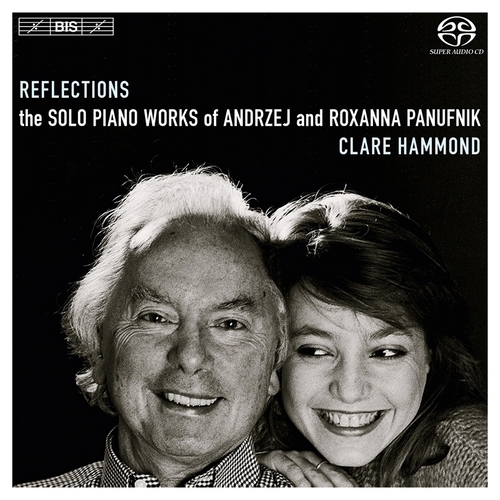 Andrzej Panufnik:
Twelve Miniature Studies (1947, rev. 1955/64)
Pentasonata (1984)
Reflections (1968)
Andrzej Panufnik, arr. Roxanna Panufnik:
Hommage a Chopin (1949/55,arr.2013)
Andrzej & Roxanna Panufnik:
Modlitwa (‘Prayer’) (1990/99, arr. 2013)
Roxanna Panufnik:
Second Home (2003, rev. 2006)
Glo (2002)
Andrzej Panufnik (1914-1991) once wrote ‘Music gets its eternal beauty from an ideal balance of emotion and intellect.’ Although Panufnik is primarily known as a composer of symphonies and large-scale orchestral pieces, his three original works for solo piano perfectly illustrate this credo. Spread out over almost four decades, they are all highly crafted, demonstrating the composer’s fascination with mirror forms and symmetrical patterns. In Panufnik’s music such workman-like, not to say cerebral, concerns never become a self-indulgence, however – although ordered according to the circle of fifths and following a strict scheme in terms of dynamics and articulation, each of the Twelve Miniature Studies from 1947 has its own highly individual mood and expression, and although the 1984 Pentasonata in almost every aspect – metre, tonality and overall structure – is governed by the number five, the composer fully succeeds in his stated aim: ‘to achieve a balance between heart and mind, intellect and emotion’. The young British pianist Clare Hammond is greatly involved in events for the Panufnik Centenary in 2014, and has devised the present disc as her first release on BIS. For it, she has chosen to include two works that might be described as ‘posthumous collaborations’ between the composer and his daughter Roxanna Panufnik, herself an acclaimed composer. Modlitwa (‘Prayer’), originally a vocal piece, was one of Panufnik’s last compositions, which Roxanna expanded in 1999, and later has made instrumental arrangements of, the most recent one being for piano. Hommage a Chopin consists of arrangements for solo piano made in 2013 of three of the five vocalises for soprano and piano that Panufnik composed in 1949, based on folk music from the region of Mazowia, where Chopin was born. Polish folk music also appears in Roxanna Panufnik’s Second Home, which expresses her sentiments for her father’s Polish homeland. Second Home is complemented on this disc by another composition by Roxanna Panufnik, the brief and atmospheric Glo.