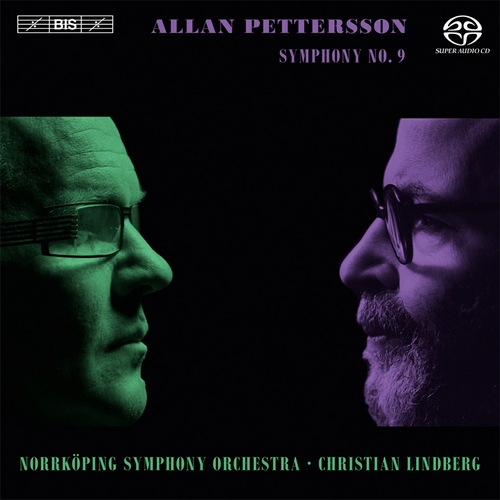 Included on a separate DVD:

‘Människans röst’ (‘Vox humana’), an 81-minute documentary (1973–78) about the composer made for Sveriges Television by Peter Berggren, Tommy Höglind and Gunnar Källström. With subtitles in English.

Allan Pettersson composed his Ninth Symphony in 1970, two years after the Seventh had been given a triumphant premiere conducted by Antal Dorati. This had brought him greater recognition than ever before, but at the same time his health was deteriorating even further, and shortly after completing the Ninth Pettersson was hospitalized for a period of nine months. It is striking that he at such a time should have chosen to compose what is the longest of all his works – in the score Pettersson himself estimated the duration to ‘65–70 minutes’, and the first recording of the work actually lasted for more than 80 minutes. As so many of the symphonies, the work is in one single movement which may be described as an extended struggle in which harmony is the ultimate winner. As Pettersson himself had said about an earlier work: ‘If one fights one’s way through a symphony one needs to achieve consonance and harmony even if it takes twenty hours to do so.’ In the case of the Ninth, this harmony is summed up more concisely than ever before or after, in the final two chords which form a plagal or ‘Amen’ cadence in F major. Completing a cycle for BIS of Pettersson’s symphonies, Christian Lindberg and the Norrköping Symphony Orchestra have been receiving great critical acclaim for previous instalments – most recently a Sixth described in International Record Review as ‘a release that could well be the ideal introduction to Pettersson’s singular musical vision’. About the same disc, the reviewer in Gramophone wrote: ‘Lindberg’s empathy for Pettersson’s music is once again shown in the Sixth, where he catches its dark atmosphere to perfection, pacing its progress through the succession of climaxes superbly well.’ The present recording is accompanied by a bonus DVD – an 80-minute documentary made during Allan Pettersson’s final years which for the first time is being made available to a wider international audience