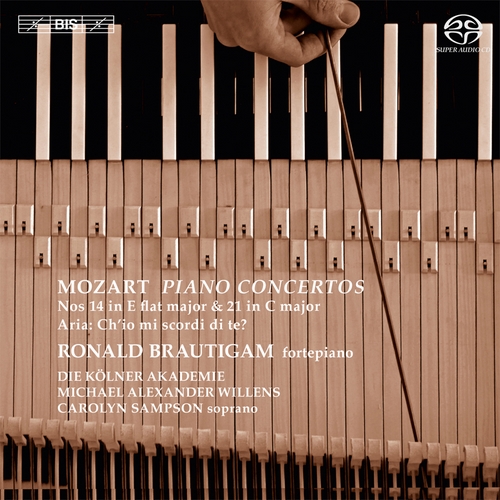 Piano Concerto No.14 in E flat major, K 449
Piano Concerto No.21 in C major, K 467 (‘Elvira Madigan’)
Recitative and Rondo - Ch’io mi scordi di te? for soprano and orchestra with obbligato piano, K 505
On 9th February 1784, Wolfgang Amadeus Mozart entered the Piano Concerto No.14 in E flat major in his personal catalogue of works, and exactly 13 months later he completed his 21st concerto, in C major. In little over a year he had composed seven piano concertos – all of them highly individual works exploring the relationship between solo instrument and orchestra in different ways, as the two concertos recorded here demonstrate. The E flat major concerto is written for piano and strings, with ad libitum parts for oboes and horns, and can according to Mozart's own instructions be performed with just a string quartet accompaniment. As might be expected there is a chamber music quality to the work, with the piano closely integrated into the ensemble. In complete contrast, Piano Concerto No.21 is written for a much larger orchestra, with flute and pairs of oboes, bassoons, horns, trumpets and timpani as well as strings. It is one of Mozart's most popular, but also most technically challenging concertos – when commenting on the score, his father Leopold noted that it was 'astonishingly difficult'. Largely because of its slow movement theme (famously used in the film Elvira Madigan), the C major Concerto has become perhaps Mozart’s most widely known. Separating the two concertos on this disc is the concert aria Ch'io mi scordi di te? (‘That I forget you?’) for soprano and orchestra with an obbligato piano part. Mozart composed the work in 1786 for the English soprano Nancy Storace and himself, possibly as a farewell gift to Storace, who was returning to London after a stay in Vienna during which she had sung the role of Susanna in the first production of The Marriage of Figaro. Another internationally acclaimed English soprano, Carolyn Sampson, joins Ronald Brautigam and the Kölner Akademie on this the seventh instalment of a series which goes from strength to strength: its predecessor (BIS-2044) was recently made an Editor's Choice in Gramophone, as well as an 'IRR Outstanding' in International Record Guide.