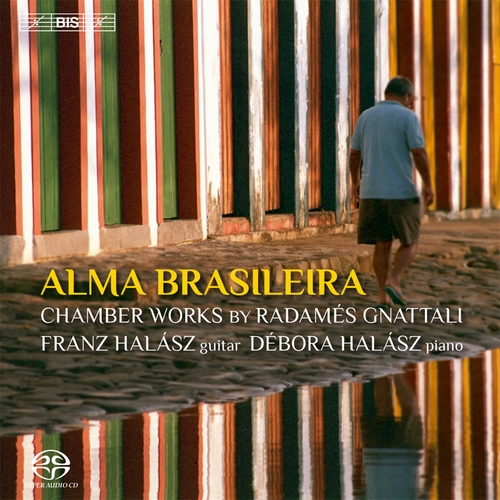 Sonatina No.2 for guitar and piano
Sonata for cello and guitar

Works for solo piano:
Moto contínuo I
Negaceando
Canhoto
Vaidosa I
Capoeirando
Trapaceando
Manhosamente
Batuque
Toccata
His parents, Italian immigrants to Brazil, named Radamés Gnattali after the male lead in Verdi’s Aida, and his mother began to teach him the piano at the age of six. But even though he did become a highly skilled pianist, performing Tchaikovsky’s piano concerto in B flat at Rio de Janeiro’s Teatro Municipal at the age of 23, it was as a composer (and arranger) of music of a distinctly Brazilian cast that he would make his name. Gnattali developed an individual style, which today might be called cross-over, by infusing inflexions of popular music into a classical framework, over a fluid harmonic technique. Jaunty rhythms and striking melodic lines appear in a wholly uncontrived manner: they formed his everyday working material, as an arranger of popular music for record companies and radio stations. When composing concert music Gnattali usually did so for musicians that he collaborated with in popular music, such as the guitarist Laurindo Almeida, as well as for himself. A large production includes works for a great variety of scorings, but for this disc Franz and Débora Halász have chosen to present chamber and solo works for guitar and piano, inviting the cellist Wen-Sinn Yang to join in for the composer's Sonata for guitar and cello. As reflected in some of the titles, Brazilian dance forms (samba, batuque, choro) play an important role in this music, which for a long time was disregarded by a musical establishment suspicious of its great fluency and popular appeal; music which in every bar expresses the soul of Brazil – Alma brasileira.