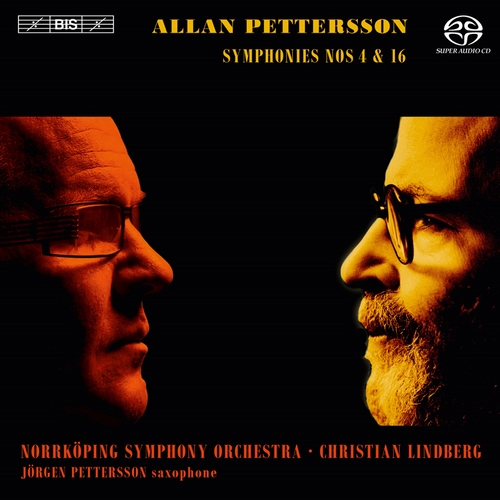 Compared to most other composers, Allan Pettersson was an out-and-out symphonist. Following his first attempt in the genre (Symphony No.1, left unfinished by the composer in 1951 and later completed by Christian Lindberg who has also recorded it on BIS-1860), Pettersson composed another 15 symphonies, leaving behind a fragment of one more at his death in 1980. During that time he only composed six other works and, in fact, it seems that he always had a symphony ‘on the go’. The exception was the years leading up to Symphony No.4, recorded on the present disc. The reason would appear to be the negative reception of its predecessor, Symphony No.3, at its premiere in 1956. Possibly this also motivated some of Pettersson’s choices once he did start on the fourth symphony – the third had had the traditional division into four movements, but he now reverted to the one-movement scheme that he had used in his second symphony and would continue to favour in future works. He also made a more extensive use of long, chorale-like passages that co-exist with more modernist ones. After the completion of the work, and following the death of his mother, Pettersson wrote in his journal: ‘Symphony No.4. To my mother, who has gone home to the life in which goodness is personified in God.’ It is tempting to perceive the chorale-like passages in the Fourth as directly inspired by the songs sung by his deeply religious mother in his childhood. Two decades later a similar stylistic duality pervades Symphony No.16, written in response to a request for a composition by the saxophonist Frederick L. Hemke. Possibly it was Pettersson’s decision to incorporate a soloistic part for alto saxophone in the work which led to the occasionally ‘jazz-scented’ style of the slow, calm section which follows upon the wild opening (marked ‘frenetico’). The work is characterized by tension – a tension that is resolved in the simple, tonal and peaceful ending. Having received overwhelming critical acclaim for their previous recordings of Allan Pettersson’s symphonies, the Norrköping Symphony Orchestra and Christian Lindberg are joined by saxophonist Jörgen Pettersson, performing the demanding solo part.
Included on a Bonus DVD: ‘Vem fan är Allan Pettersson?’ (‘Who the hell is Allan Pettersson?’), a 52-minute interview made in 1974 for Sveriges Television. With subtitles in English