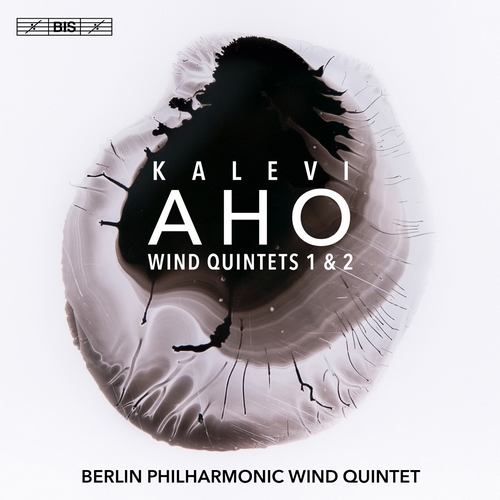 Wind Quintet No. 1
Wind Quintet No. 2
With 17 symphonies in his list of works, not to mention operas and concertos, it is easy to forget that KaleviAhoalso composes chamber music. He has in fact written some ten quintets alone, for various combinations of instrument. Two are ‘normal’ wind quintets and it is these that the Berlin Philharmonic Wind Quintet (BPWQ) perform on the present disc. The ensemble came into contact with the Finnish composer’s Wind Quintet No. 1in 2010, and was immediately struck by the qualities and challenges of the score. The composer himself has described the difficulties in writing for wind quintet, in terms of achieving a balanced and homogeneous sound and soft dynamics. In his first quintet he therefore included unison passages and sometimes even reduced the music to one or two parts. In the fourth movement he also added a spatial dimension by having all of the players perform from offstage at some point.

Having played the work a number of times on their many tours, the BPWQ decided to commission their own quintet, and in 2015 they gave the first performance of Wind Quintet No. 2. This time, Ahofound another solution to the inherent difficulties –by making the flutist and oboist change instruments to piccolo or alto flute and coranglaisat various points, the piece achieves an even wider spectrum of unusual and innovative tone colours and moods.
Recording: October 2014 at the Kammermusiksaal, Philharmonie, Berlin, Germany (No. 1) and October 2016 at Traumton Studios, Berlin-Spandau, Germany (No.2). Played on: Flute - Anton Braun, Egelsbach, No. 279.3; Oboe - Marigaux, Paris, No. 36764