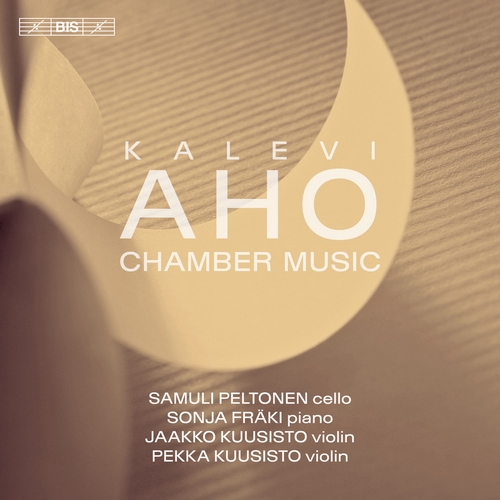 Prelude, Toccata and Postlude
Lamento
Halla
Sonata for solo
In memoriam Pehr Henrik Nordgren
Piano Sonata No. 2
Internationally acclaimed for his music for orchestra (17 symphonies and 31 concertos to date), Kalevi Aho has also composed chamber and solo works. The present disc combines six such pieces, ranging across the composer’s career. The earliest work on the disc is the Bach-inspired Sonata for solo violin from 1973, reminding us that during his years at the Sibelius Aacademy (1968 –71), Aho studied the violin as well as composition. Another early piece, Prelude, Toccata and Postlude, also started out as a solo work – this time for the cello – before developing into a duo. From the other end, chronologically speaking, is the ample Piano Sonata No. 2 from 2016, with a duration of some 25 minutes. This time it is Beethoven who has provided inspiration, and the composer describes the work as ‘a commentary on the Hammerklavier Sonata, in which Beethoven’s motifs are frequently “misquoted” and developed in a different direction.’