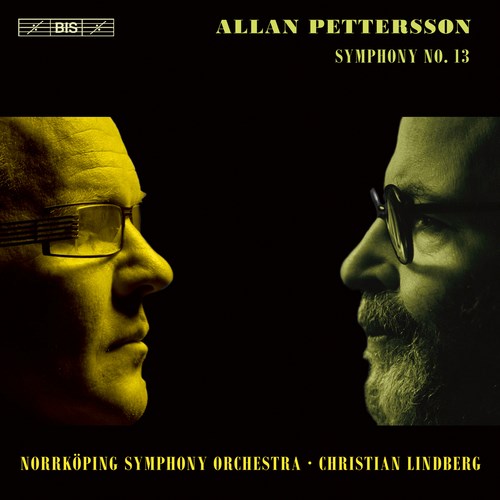 Beginning his first (never completed) symphony in 1951 and working on his 17th when he died in 1980, Allan Pettersson during three decades concerned himself almost exclusively with the symphonic genre – and this at a time when many composers considered the symphony (and indeed the symphony orchestra) to be hopelessly old-fashioned. Pettersson, however, was deeply committed to the genre, something which in Sweden during the early 1960s was so unusual that he was called ‘the last symphonist’. He completed his Symphony No.13 in August 1976, as a commission by the Bergen Festival for its 25th anniversary the following year. The complexity and large scale of the work was such that the first performance was postponed for another year, however – and in fact the work had never been performed in Sweden until Christian Lindberg and the Norrköping Symphony Orchestra played it in concert in 2014. As the majority of Pettersson’s symphonies it is in one movement, harbouring the great contrasts between an atonal and a traditional, tonal idiom that characterize the composer’s musical language. A noteworthy feature in the present work is the presence of many brief allusions to other composers – from Beethoven (with the theme to the Fifth Symphony) to D-S-C-H, the musical cryptogram of Shostakovich’s name. Over the course of four previous discs, Christian Lindberg and the Norrköping Symphony Orchestra have demonstrated a true affinity with Pettersson’s music, an affinity that deepens with each new recording.