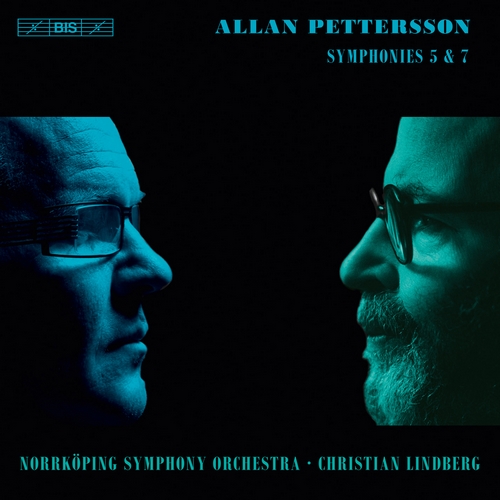 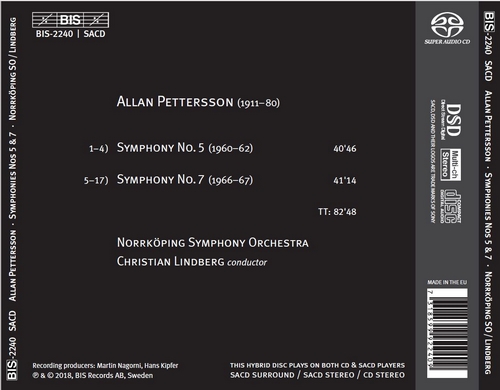 A characteristic trait in Allan Pettersson’smusic is the use of strong contrasts –shifts between an enormous intensity and calm relaxation, between complex and violently dissonant passages and peaceful, simple melodies and harmonies. This certainly applies to both works recorded here by the NorrköpingSymphony Orchestra andChristian Lindberg –the composer’s Fifth and Seventh Symphonies. Premiered in 1963 and 1968 respectively, these two symphonies contributed substantially to Pettersson’spublic standing during the 1960s. The Fifthearned him the music prize of the newspaper Expressen, while at the same time Pettersson’sextensive use of traditional harmony, particularly in the slow ending of the work, caused a number of commentators to criticize it as ‘outmoded’. In 1964, the symphony probably contributed to Petterssonbeing selected as one of the first recipients of a public remuneration scheme for composers which guaranteed them a lifelong minimum income. Four years later, the first performance of Symphony No. 7 was conducted by AntalDoráti, the dedicatee of the work. The event is often described as Pettersson’s‘breakthrough’, and Doráti’srecording of the work in 1969 with the Stockholm Philharmonic Orchestra earned the performers and the composer a ‘Swedish Grammy’ Award each. Pettersson’sSeventh remains the most recorded and most frequently performed of all of his works. It is heard on disc in a performance from what are widely regarded as the leading Petterssoninterpreters of our time.