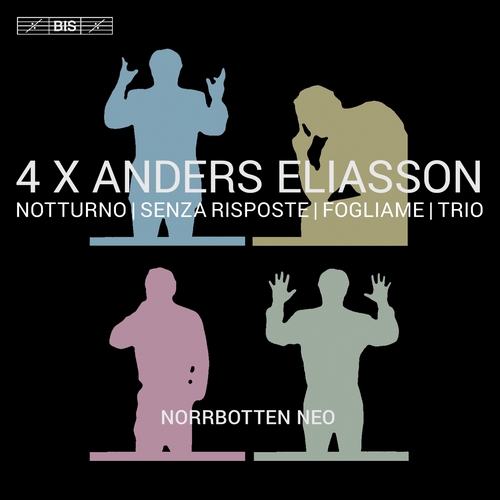 Anders Eliasson (1947–2013):
Notturno (1981) for bass clarinet, cello and piano
Senza risposte (1983) for flute, violin, cello and piano
Fogliame (1990) for violin, viola, cello and piano
Trio (2010) for violin, vibraphone and piano
Born in a provincial Swedish town in 1947, Anders Eliassonstarted playing the trumpet at the age of 9 and soon after formed his own jazz band. In his teens he began to study classical music, however, and aged 19 he was accepted into the composition class at the Royal Academy of Music in Stockholm. Here modernism reigned supreme, and Eliassonfelt out of touch with a style that he later described as petrified and intellectualized. His own idea of music was completely different, and he went so far as to say that he did not, in point of fact, compose music but merely assisted in its birth.

Eliassonfirst came to wider notice during the second half of the 1970s, with his Disegnoper quartettod’archiand Canto del vagabondofor boy soprano, choir and orchestra. But as he himself acknowledged, it was in the early 80s that he truly began to find his own voice, for instance with chamber works such as Notturnoand Senzarisposte. During the rest of Eliasson’scareer, it would be compositions for large forces that attracted the greatest attention, in Sweden and abroad: from Symphony No. 1 (1986), which received the Nordic Council Music Prize, to the great oratorio Dante Anarcaand Symphony No. 4, premiered by the Bavarian Radio Symphony Orchestra in 2007.
Recording: May 2016 at Stora Salen, Studio Acusticum, Pitea, Sweden