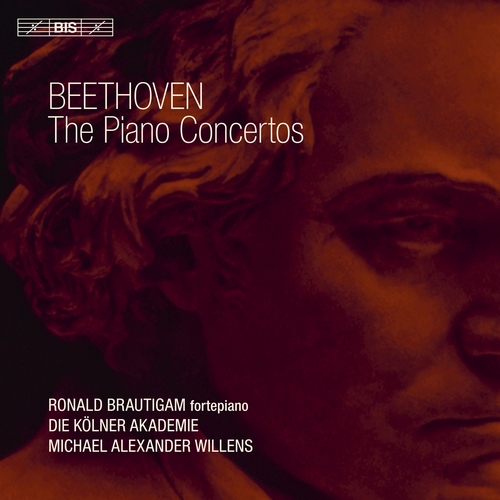 CD 2:
Piano Concerto No. 3 in C minor, Op. 37
Piano Concerto No. 5 in E flat major, Op. 73, ‘Emperor’
As one of the finest pianists of his era and an improviser of genius, Ludwig van Beethoven’s preferred vehicle for musical exploration was the piano. His earliest composition, from 1782, was a set of piano variations and he continued to compose for solo piano until the last years of his life. His interest in the concerto form diminished as his deafness forced him to retire from performing. Nonetheless, with his five piano concertos composed between 1788 and 1809, Beethoven not only achieved a brilliant conclusion to the Classical piano concerto, but also established a new model for the Romantic era: a sort of symphony with obbligato piano which remained a reference point well into the beginning of the twentieth.

Ronald Brautigam has already recorded these seminal works with the Norrköping Symphony Orchestra, in acclaimed performances released between 2008 and 2010. Since then he has also released all of Beethoven’s solo piano music on the fortepiano to universal praise. When Brautigam now returns to the concertos, it is in the company of conductor Michael Alexander Willens and Die Kölner Akademie playing on period instruments. The same team has previously partnered him in an 11-disc survey of Mozart’s piano concertos and it is plain to hear that all involved clearly relish the opportunity to congratulate Beethoven on the eve of his 250th anniversary.
Recording: July 2017 (Nos 1 & 3) and July 2018 (Nos 2, 4 & 5) at the Deutschlandfunk Kammermusiksaal, Cologne. Instrumentarium: Paul McNulty 2012, after Walter & Sohn c.1805 (Concertos 1, 2 and 3); Paul McNulty 2007, after Conrad Graf c.1819 (Conc 4 & 5)