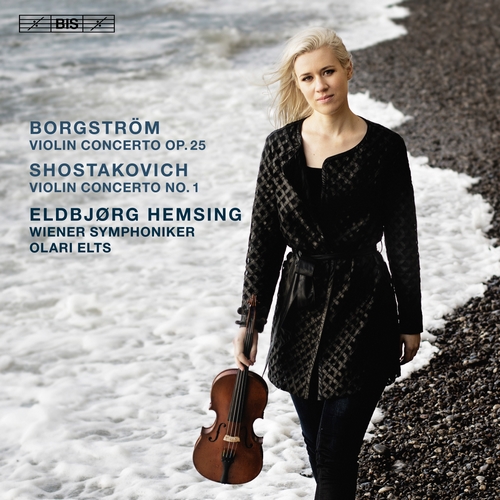 Dmitri Shostakovich:
Violin Concerto No. 1 in A minor, Op. 77
EldbjorgHemsinghas been a household name in her native Norway since childhood and made her solo debut with the Bergen Philharmonic Orchestra at the age of 11. During and after her studies in Vienna, she has absorbed repertoire ranging from Beethoven to Tan Dun, a composer she has collaborated with on several projects in both Europe and Asia. The present disc marks EldbjorgHemsing’sfirst appearance on BIS, and is also her début CD. For the occasion she has chosen to highlight an all but forgotten work by a countryman, Hjalmar Borgström. Like Grieg in the preceding generation, and indeed like many Nordic composers in the late nineteenth century, Borgströmwent to Germany to study. However, in contrast to Grieg who returned from Germany firmly resolved to carve out an authentic, Norwegian idiom, Borgströmcame back a staunch proponent of new German symphonic music. His Violin Concerto in G majorwas first performed in 1914 as part of a celebration of the centenary of the Norwegian constitution, and the highly tuneful and expressive work was well received. It did not become established in the repertoire, however, and remained practically unknown for nearly a century. It is combined here with a work that is rather more central to the violin repertoire, Dmitri Shostakovich’s First Violin Concerto. This was composed at a difficult time for the composer, whose music was denounced as ‘formalistic’ and ‘anti-democratic’ in the infamous so-called Zhdanov decree of 1948. As a result of the post-Stalin thaw the work could finally be premiered in 1955, and with David Oistrakhas its advocate it became instantly successful. Eldbjorg Hemsingis supported in this and in Borgström’sconcerto by the eminent Wiener Symphonikerconductedby Olari Elts.
Recording: September 2015 at the MuTh Concert Hall, Vienna, Austria