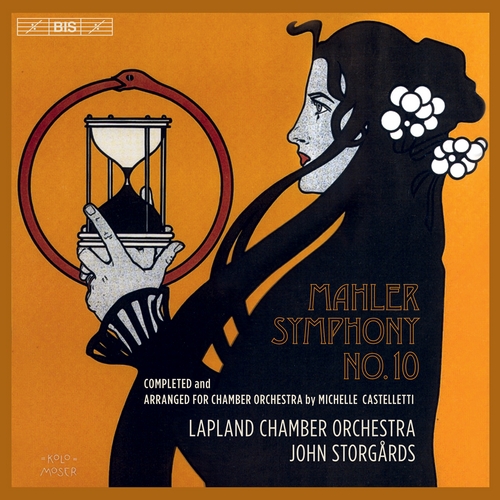 Symphony No. 10 in F sharp major
Completed and arranged for chamber orchestra by Michelle Castelletti
Left unfinished at the death of the composer, Gustav Mahler's Tenth Symphonyhas exerted an enormous fascination on musicologists as well as musicians. Whether fully orchestrated in specific passages, or a sole melody in others, there is one continuous line throughout the surviving manuscript pages and over the years a number of different completions or performing versions have seen the light of day. One of the latest is this 'recreation' of the work for chamber orchestra by composer and conductor Michelle Castelletti.

In her liner notes to the recording, Castelletti describes the symphony as 'possibly one of Mahler’s most passionate emotional outbursts and autobiographical creations'. The decision to make an orchestration for chamber forces was inspired by the example of the Viennese Society for Private Musical Performance, established by Arnold Schoenberg in 1918 with the goal of performing newly composed music. Among the works performed by the Society were chamber orchestra versions of Mahler’s Symphony No. 4 and Das Lied von der Erde – the latter made by Schoenberg himself – and in her version of Symphony No. 10, Castellettiuses a similar instrumentation. This new completion appears on disc for the first time, in a performance by the acclaimed Lapland Chamber Orchestra under John Storgards, the ensemble’s artistic director since 1996.
Recording: October 2017 at Korundi House of Culture, Rovaniemi, Finland