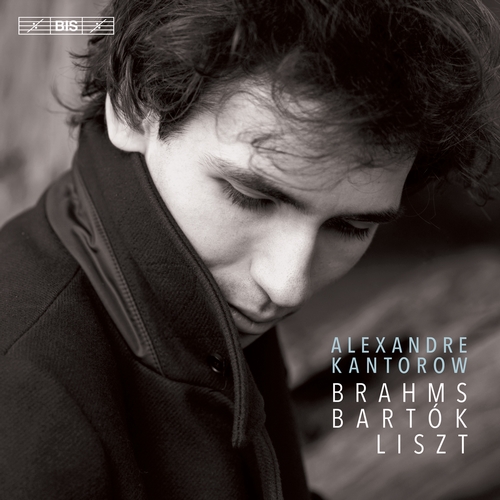 Franz Liszt:
Hungarian Rhapsody No. 11
In 2019, at the age of 22, Alexandre Kantorow became the first French pianist to win the prestigious Tchaikovsky Competition. But already before then he had released three acclaimed discs, awarded distinctions such as Diapason d'orde l'Année and Gramophone's Editor's Choice and earning Kantorow descriptions ranging from 'Liszt reincarnated' to 'a fire breathing virtuoso with a poetic charm and innate stylistic mastery'. The present recital, his first release since the Tchaikovsky Competition, offers plenty of scope for virtuosity, poetry and charm, always filtered through an acute stylistic consciousness. The programme is constructed around three rhapsodies, a genre whose improvisatory character corresponds perfectly with the spirit of Romanticism but here interpreted by three highly distinct artistic temperaments: Franz Liszt, Johannes Brahms and Béla Bartók.

Opening with an example of the mature Brahms, his First Rhapsody from 1879, Kantorow takes us back to the very beginning of the composer's career, with the youthfully impassioned Piano Sonata No. 2. Brahms was 21 when he wrote the sonata – only two years younger than Bartók in 1904, the year his Rhapsody was composed. At the time, Bartók was just beginning to discover the folk music which would become such an important source of inspiration. Being a Hungarian and a budding pianist, he was, however, very familiar with the music of Liszt, and will have known the composer's Hungarian Rhapsody No. 11 with its final prestissimorushing the disc to an impetuous close.
Recording: September 2019 at the Fondation Louis Vuitton, Paris, France (Bartók, Liszt), January 2020 at the Tapiola Concert Hall, Finland (Brahms). Piano: Steinway D.