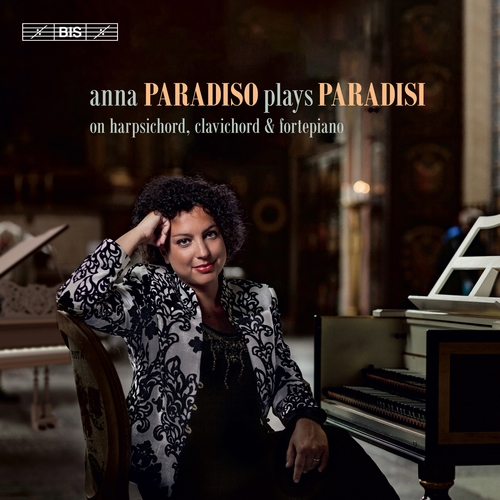 Sonatas I—X from ’Sonate di gravicembalo’ (London 1754):
Sonata X in D major
Sonata I in G major
Sonata IV in G minor
Sonata V in F major
Sonata VI in A major
Sonata III in E major
Sonata II in B flat major
Sonata VII in B flat major
Sonata VIII in E minor
Sonata IX in A minor
As Anna Paradisowrites in her liner notes to this disc ‘the history of music is full of fine composers who, for one reason or another, have been largely forgotten.’ In the case of Pietro Domenico Paradisi, it is only thanks to his Sonate di gravicembalo that he has escaped complete obscurity. Even his name is less than certain – is it Paradiesor Paradisi? We know that he sometimes added the epithet ‘Napolitano’ to his signature, and it’s presumed that he was born in or around Naples c. 1706. He may have studied with Nicola Porpora, but otherwise little is known about him before his arrival in England in 1746. There he composed an opera, but was primarily recognised as a harpsichord teacher and performer.

The collection of twelve sonatas was first published in London in 1754, and ten of them have been selected for this amply filled disc (almost 88 minutes of music!). The sonatas appeared at a time when the clavichord remained in use, the harpsichord enjoyed its glory days and the fortepiano was beginning to come into its own. Anna Paradiso has therefore chosen to play on all three instruments – with the clavichord and the fortepiano being historic examples from 1792 and 1802 respectively. Highly acclaimed for her recordings of solo works and chamber music by the Swedish composer Johan Helmich Roman, Anna Paradiso now lets us enjoy the playfulness and expressivity of Paradisi’s approach to keyboard playing.
Recording: Nov 2018, at Petruskyrkan. Instrumentarium: French harpsichord by François Paul Ciocca (2008) after Nicolas & François Blanchet (1730); Original Swedish clavichord by Pehr Lindholm (1792); Original fortepiano by John Broadwood & Sons (1802).