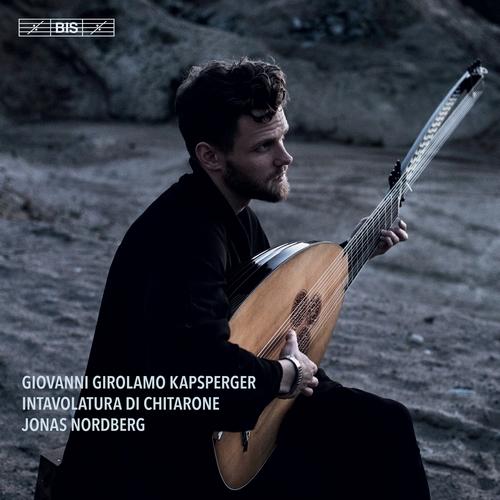 Music from Libro primo d’intavolatura di chitarone (Venice 1604) & Libro quarto d’intavolatura di chitarone (Rome 1640):
Toccata 1ma
Passacaglia [1ma]
Gagliarda 1ma
Canzone 1ma
Toccata 2da
Passacaglia [2da]
Gagliarda 8va
Canario
Aria di Fiorenza
Toccata 9na
Passacaglia [4ta]
Gagliarda [7ma]
Toccata 5ta
Gagliarda 11a
Gagliarda 12a
Ballo primo
Toccata Arpeggiata
Battaglia
Kapsperger
At the end of the 16th century, the pursuit of greater, more vivid expressivity dominated music-making all across Italy, taking madrigals and other vocal ensemble forms as its starting point but soon going on to explore the possibilities offered by solo singing. For some decades the theorbo (or chitarone, as it was also called) was regarded as the ideal instrument for accompanying singers, but as a leading exponent of the instrument Giovanni Girolamo Kapsperger soon also established it as a solo instrument in its own right. Of German descent, Kapsperger published his first book of solo pieces for the theorbo in 1604 and went on to enjoy a successful career in Rome, contributing to the monumental cultural programme of Pope Urban VIII. There he moved in intellectual circles, particularly that of the scientist Galileo Galilei.

During the 1630s things became quiet for Kapsperger, possibly a side effect of Galilei’s conviction for heresy in 1633. Not until 1640 did his last known volume of theorbo pieces appear, the number four in its title indicating that two books have been lost. A particularly attractive aspect of Kapsperger’s music for the theorbo is the marked contrasts between dramatic and impetuous toccatas, straightforward, ‘no-nonsense’ passacaglias and rhythmically refined but simply constructed dance movements such as galliards. These are here all made to sound under the fingers of Jonas Nordberg, sought-after as soloist as well as ensemble musician, performing on a wide range of plucked instruments including the lute, guitar and theorbo. On BIS he has previously appeared on the acclaimed album Heroines with soprano Ruby Hughes and in chamber works with recorder player Dan Laurin.
Recording: September 2018 at Länna Church, Sweden. Instrumentarium: