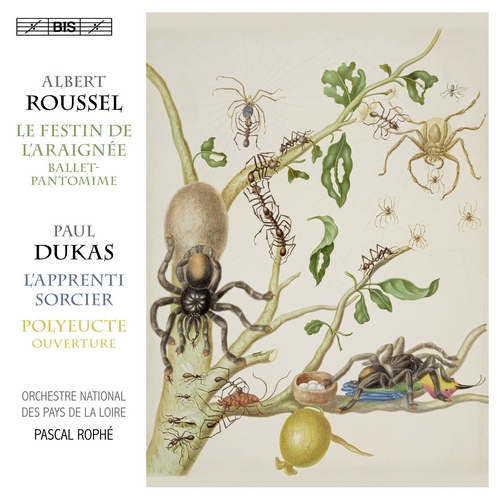 Albert Roussel:
The Spider’s Feast, Op. 17 (Le Festin de l’Araignée) - Pantomime ballet in one act
Under its music director Pascal Rophé, l’Orchestre National des Pays de la Loire (ONPL) here performs two great orchestral spectaculars of French music – scintillating and imaginative scores composed only 15 years apart. A perennial favourite, Paul Dukas’ symphonic poem The Sorcerer’s Apprentice (1897) became a ‘hit’ with the general public after being included in the soundtrack of the Disney animation film Fantasia in 1940. In the work, based on a ballad by Goethe, Dukas displayed an extraordinary command of the large late-Romantic orchestra as he depicted the disastrous consequences when a young apprentice tries to work the magic charms of his master.

In 1912, when Albert Roussel composed his ballet score The Spider’s Feast, he was rather influenced by Impressionism, but his use of the orchestra was no less inventive than Dukas. The plot of the ballet is played out in a garden where a spider is trapping various insects in its net looking forward to having a sumptuous meal. Roussel’s sophisticated use of timbres and his characteristic rhythmic pointillism conjures a micro-drama which also features a mayfly, a team of ants and a rather terrifying pair of praying mantises. The disc opens with another piece by Dukas: Polyeucte, a concert overture inspired by a 17th century play and a work of a surprising expressive power.
Recording: July 2018 at La Cité des congres, Nantes, France. Płyta wydana w opakowaniu BIS ekopak.