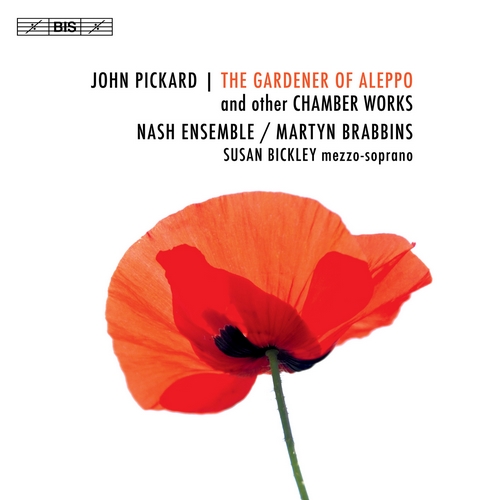 The Gardener of Aleppo
Daughters of Zion
Snowbound
Serenata Concertata
Three Chicken Studies
The Phagotus of Afranio
Ghost-Train
Four previous releases on BIS have all featured John Pickard’s music for large orchestra – or, in the case of the Gaia Symphony (BIS-2061), large brass band. This new disc, on the other hand, presents scorings ranging from a solo oboe to a chamber ensemble of eight players. The seven works cover just over 30 years; the earliest one, Serenata Concertata, was Pickard’s first paid commission written at the age of twenty. In his liner notes, Pickard notes that he has an aversion to repeating himself: ‘so each new work tends to be a reaction against the character, structure and technique of the previous one… The result has been a body of work with a wide expressive range and this disc gives some indication of that. The pieces on it are grouped in a broad progression from the serious to the more lighthearted.’

The two opening works are indeed inspired by serious matters – the background to The Gardener of Aleppo is the war in Syria, while Daughters of Zion, the only vocal work on the disc, sets a text that reflects on anti-Jewish aspects of certain Early Christian celebrations. In the latter work, Susan Bickley joins the players of the celebrated Nash Ensemble, who go on to lighter fare in Three Chicken Studies (Pickard himself has kept chickens as pets) and Ghost Train, a perpetuum mobile built on a cantus firmus derived from the Dies ira theme. For this and the other chamber ensemble pieces the conductor Martyn Brabbins, a longtime collaborator of Pickard’s, wields his baton.
Recording: September 2018 at All Saints’ Church, East Finchley, London, England.