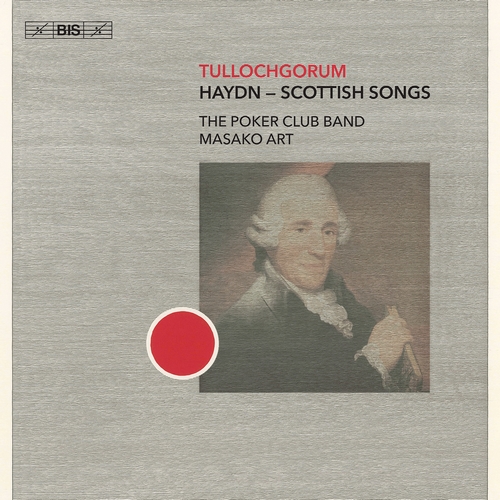 Tracks 1, 2, 5-8, 12-13, 16-18 arranged by Joseph Haydn
harp and guitar parts adapted by Masako Art
Tracks 3, 4, 14 & 15 arranged by John Elouis
Tracks 9-11 arranged by François de Fossa, harp part adapted by Masako Art
Part of track 18 - traditional
Track 19 composed by Niel Gow
Between 1791 and 1804, Joseph Haydn arranged some 400 traditional songs for publishers in Scotland and England. Almost all of the songs were Scottish and the most common setting was for voice and piano trio. There has been numerous recordings and performances of the arrangements by these forces, but on this disc The Poker Club Band offer their listeners something quite different. Taking its name from one of the Edinburgh clubs at the heart of the Scottish Enlightenment, the ensemble consists of four early music specialists and a traditional singer. They have retained Haydn’s violin and cello, but the keyboard part has been adapted for harp and guitar following indications that the harp was commonly used for contemporary performances of Scottish traditional repertoire. The Gaelic singer James Graham, with his idiomatic Scottish timbre, and the period instruments – of which Masako Art’s single-action pedal harp from 1809 is known to have been in Scotland around the time – brings us that much closer to what a performance in an Edinburgh salon might have sounded like around 1800.

The songs themselves range from the cautionary tale of a girl who married for love and now is doomed to a life of hard and dirty work on her husband’s farm (The Mucking of Geordie’s Byer) to love songs such as Oran Gaoil, with a text by Robert Burns. Providing variety, some instrumental 18th century arrangements of Haydn originals are included while the disc ends with the well-known atmospheric Lament by the Scottish fiddler Niel Gow.
Recording: July 2016 at the Kirche St. German, Seewen, Kanton Solothurn, Switzerland. Instrumentarium: Single-action Pedal Harp: Sebastian Érard, London, 1809. Violin: anon., southern Germany, c. 1700 50. Płyta wydana w opakowaniu BIS ekopak.