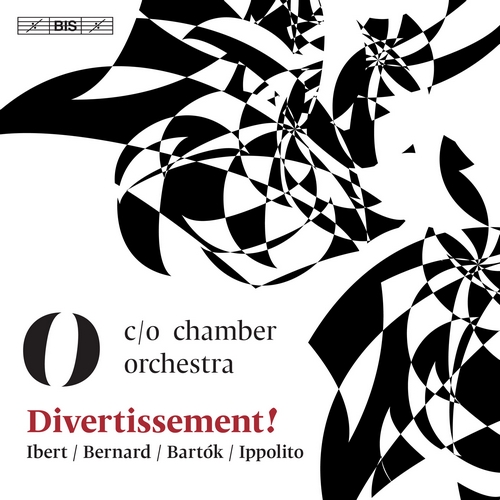 Michael Ippolito:
Divertimento for chamber orchestra
The c/o chamber orchestra is a collective of thirty young musicians from over a dozen different countries. Playing without a conductor, the orchestra is dedicated to that particular collaborative process which is the essence of chamber music. For their first disc, the members have chosen to highlight a genre more difficult to pin-point than one might think. Its very name, divertimento, implies that it is simply a diversion, light music for entertainment - but many of the best-known examples of the form transcend that definition. And as many composers have learned, even light-hearted music should be taken seriously: humour requires a master's touch. The four works recorded here offer different perspectives on the genre, starting with Ibert's seven-movement suite in which the composer constantly plays with the listener's expectations.

Some forty years before Ibert, his compatriot Emile Bernard composed a very different Divertissement. It scored for double wind quintet, reminiscent of Mozart's divertimenti and serenades for winds. But even though the music is melodious and carefree, the debt owed by Bernard to the German romantic composers is never far from the surface. A very special case is Bartok's Divertimento for strings, composed just before the outbreak of World War II. Possibly the diversion aimed at here is rather that of the composer, trying to forget about the state of the world - something which Bartok finally succeeds with in the joyous last movement. The closing work on the disc reunites the winds and strings of the c/o orchestra in a work written especially for this project by the American composer Michael Ippolito, who in his Divertimento pays fulltribute to the contrast-rich nature of the genre.
Recording: August 2018, Jesus-Christus-Kirche, Berlin-Dahlem, Germany (Ibert, Bernard, Ippolito); October 2020, Christus-Kirche, Berlin-Oberschöneweide, Germany (Bartók).