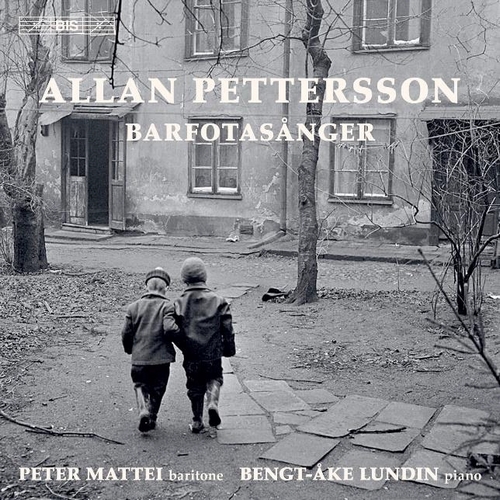 Six Songs for voice and piano (1935)
Barfotasanger (Barefoot Songs) (1943–45)
From 1950 and onwards, Allan Pettersson was mainly occupied with working on the monolithic symphonies for which he is best known. But before that, while still a student at the Conservatory in Stockholm and later a viola player in the Stockholm Philharmonic Orchestra, he composed two sets of songs: Six Songs and Barfotasanger (Barefoot Songs). Of these two, the second would become especially important for the composer, who returned to it throughout his life, quoting various songs from it in his symphonies.

In Barfotasanger he set his own poems, full of autobiographical detail and using a highly personal, archaic language. Several of the songs reflect his childhood, as the youngest of four children growing up in a poor working-class neighbourhood in Stockholm. All but two of them are in a minor key, in an idiom which alludes to folk songs, hymns and popular songs. They are here brought to sometimes painful life by Peter Mattei, one of the great singer-actors of our time, supported by Bengt-Ake Lundin, with whom he first collaborated almost 30 years ago, on an album of songs by Wilhelm Stenhammar.
Recording: 11th 14th March 2021 at Örebro Konserthus, Sweden. Grand piano: Steinway D.