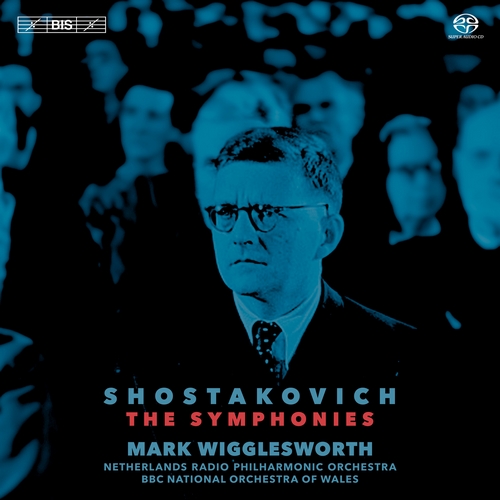 CD 10:
Symphony No. 13 in B flat minor, Op. 113, ‘Babi Yar’
Mark Wigglesworth recorded his cycle of Shostakovich's symphonies between 1996 and 2010, collaborating with two different orchestras, the Netherlands Radio Philharmonic Orchestra and BBC National Orchestra of Wales. In spite of the long gestation and the change of orchestra midway, the cycle was described as one never 'compromising its particular characteristics of high seriousness, fine detailing and a certain fierceness of articulation' (Gramophone). Already the first instalment - Symphony No. 7, 'Leningrad' - raised expectations, for instance with the reviewer in The Sunday Telegraph: 'There is plenty of competition among Shostakovich cycles, but this one will deserve serious consideration'. And 17 years later, on the release of the final disc, The Guardian could report that 'Wigglesworth's cycle emerges as one of the finest of recent time'.

What particularly impressed reviewers was Mark Wigglesworth's faithfulness to the score and sharp ear for detail, and the structural clarity he achieved even with the most complex works - without sacrificing any of their impact and emotional power. Also receiving acclaim throughout the series were the recordings themselves and their superior sound quality - an aspect that has been enhanced even further for this boxed set, now that the five symphonies that were released first, and on CD, have been re-mastered for Surround Sound and SACD to match the rest.
Recordings: The Music Centre, Studio MCO5, Hilversum, the Netherlands, October 2006 (Symphony No.1) and October 2010 (Symphonies Nos 2 and 3), September 2005 (CD 2); Brangwyn Hall, Swansea, Wales, December 1996 (CD 3 & 4).