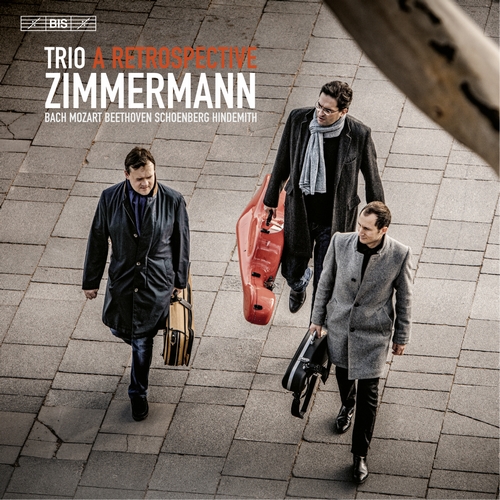 Arnold Schoenberg:
Trio, Op. 45
In 2007 Frank Peter Zimmermann was able to realize his long-cherished dream to establish a string trio, together with Antoine Tamestit and Christian Poltéra. Three individually superb string players do not necessarily add up to a top-flight trio – even if they all play on instruments by Stradivarius, as here – but Trio Zimmermann immediately made a name for itself at international festivals and prestigious concert venues. In 2010 the trio released its first disc – with Mozart's seminal Divertimento – to critical acclaim. (More than 10 years later, that recording was the top recommendation in the Record Review series Building a Library on BBC Radio 3.)

On following offerings, the ensemble explored the later repertoire for string trio: two discs with Beethoven's contributions to the genre, and a third with works by Hindemith and Schoenberg which have garnered distinctions such as Diapason de l’Année, the Chamber Award from BBC Music Magazine and a ‘Jahrespreis’ from the German Record Critics’ Award association. For their fifth disc to date the trio went back in time, however, as the three members together prepared a performing version of Bach's Goldberg Variations, described as ‘a triumph of combined technical ingenuity and musical insight’ in The Strad. These five discs have now been collected into a boxed-set retrospective, offering lovers of chamber music more than 5 hours of glorious music-making, in top-notch sound and including the original booklets with full documentation.
Zbiorcze wydanie wcześniejszych wydawnictw: BISSACD 1817, BISSACD 1857, BISSACD 2087, BISSACD 2207, BISSACD 2347. Instrumentarium: Violin: Antonio Stradivarius, Cremona 1711, ‘Lady Inchiquin’; Viola: Antonio Stradivarius, Cremona 1672, ‘Mahler'.