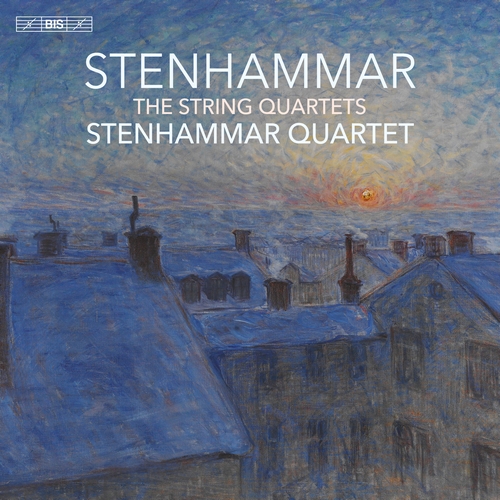 CD 3:
String Quartet No. 5 in C major (‘Serenade’), Op. 29
String Quartet in F minor
String Quartet No. 6 in D minor, Op. 35
Composed between 1894 and 1916 Wilhelm Stenhammar’s body of six numbered string quartets is considered unique among Scandinavian music of its time, both in its consistency and in its musical aspirations. Together, the quartets reflect the composer’s development, from full-blown Romanticism to a more sparse and formally concentrated idiom that distances itself from late-Romantic conventions.

Taking its name from the composer, the Stenhammar Quartet was the first ever to propose a complete traversal of the cycle on CD, including the world premiere recording of a quartet in F minor that Stenhammar withdrew from his official catalogue after completing it. The series was greeted with great international interest and critical acclaim, both for performances described as ‘exceptional’ (The Guardian) and for the quality of the music itself: ‘there is no doubt that Stenhammar belongs to the unknown great masters of the string quartet genre’ (Klassik-Heute.de).
Recordings: December 2013 (CD 1, No. 1) and September 2013 (CD 1, No. 2); April & October 2011 (CD 2, No. 4); June 2012 (CD 2, No. 3; Lodolezzi sjunger); October 2011 (CD 3, F minor); December 2012 (CD 3, Nos 5 & 6) at Petrus Kyrkan, Stocksund, Sweden.