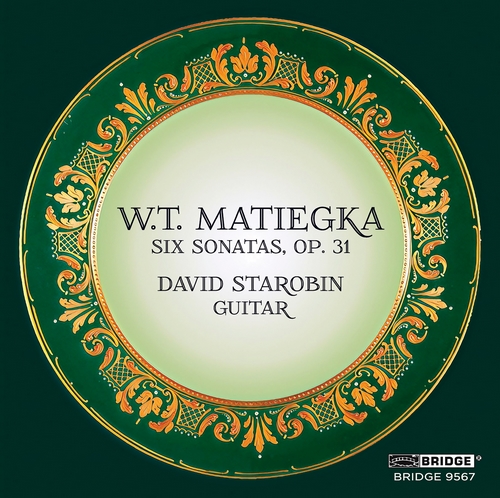 Sonata No. 1 in C major, Op. 31/1
Sonata No. 2 in A minor, Op. 31/2
Sonata No. 3 in G major, Op. 31/3
Sonata No. 4 in E minor, Op. 31/4
Sonata No. 5 in D major, Op. 31/5
Sonata No. 6 in B minor, Op. 31/6
Bridge Records is pleased to issue guitarist David Starobin's final studio recording, W.T. Matiegka's Six Sonatas, op. 31, performed on a Viennese style guitar. Starobin regards Matiegka's sonatas as "in their time, the pinnacle of expression on the guitar, offering the most detailed notation of both articulation and character--a clear window onto performance style in the era of Beethoven and Schubert." Since Starobin's retirement from the concert stage in 2018, the native New Yorker has kept a busy schedule, co-authoring with his wife Becky, the libretto of the opera The Thirteenth Child (music by Poul Ruders); writing and directing the film, String Trio, Los Angeles 1946 (filmed in Arnold Schoenberg's Los Angeles home); and serving as Director of Artists and Repertoire at Bridge Records. David Starobin teaches at the Manhattan School of Music and the Curtis Institute of Music in Philadelphia, where he co-founded Curtis's guitar program in 2011. A frequently honored figure, Starobin was called “arguably the most influential American classical guitarist of the 20th Century” (Soundboard), and was inducted into the Guitar Foundation of America's "Hall of Fame" in 2011.
Recorded at Greenville Community Church, Scarsdale, NY, October 2019. Guitar: Hermann Hauser, Viennese model, Munich 1935.