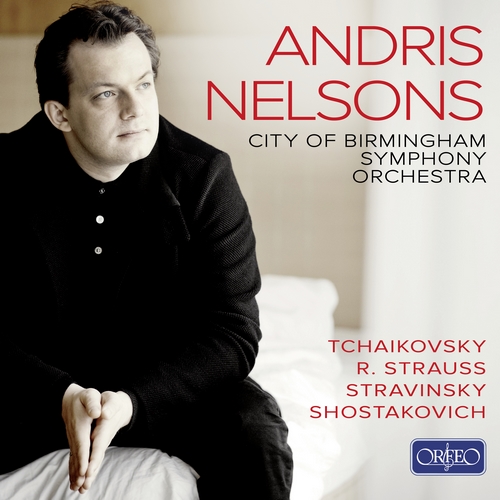 CD 9:
Dmitry Shostakovich:
Symphony No. 7 in C major, Op. 60, “Leningrad”
Andris Nelsons, currently principal conductor of both the Boston Symphony Orchestra and the Leipzig Gewandhaus Orchestra, was discovered by Orfeo as someone to be promoted on album. Orfeo had engaged him to conduct the Bavarian Radio Symphony Orchestra in recordings of Shostakovich’s two violin concertos with soloist Arabella Steinbacher. It quickly became apparent that, in him, they had one of the great conductors of his generation in the making, a development that took place at breathtaking speed. Following his appointment as principal conductor and music director of the City of Birmingham Symphony Orchestra, Orfeo persuaded him to take on a number of ambitious recording projects: Tchaikovsky’s complete symphonies (the first three were recorded but not released following Nelsons’ departure to Boston); symphonic poems and other orchestral works by Richard Strauss; and works by Stravinsky and Shostakovich. In so doing, Orfeo was able to faithfully record the legacy of his time at Birmingham, which proved the first major international step in Andris Nelsons’ career.
Recordings: Birmingham Symphony Hall, 1/4 Juni 2011 (CD 1); 16–17 Oktober 2008 (CD 2); 17/18 Juni 2009, 2/3 Juni 2010 (CD 3); 24–27 September 2013 [Live] (CD 4); 28 Mai, 22/24/27 Juni 2009 (CD 5); 21/22 & 26/27 Juli 2009 (CD 8); 10/12 November 2011 (CD 9)