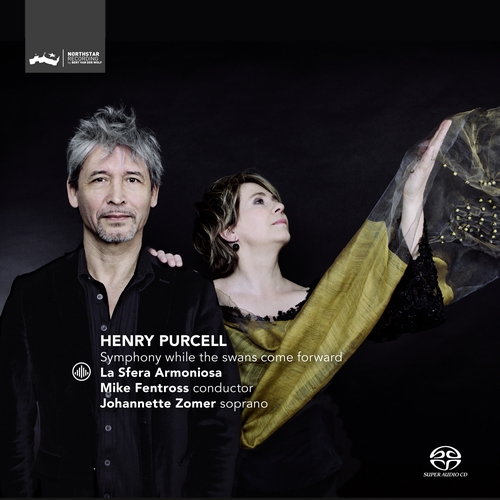 The Prophetess - or, The History of Dioclesian, Z.627
The Indian Queen, Z.630
King Arthur, Z.628
The Fairy Queen, Z.629
La Sfera Armoniosa, founded in 1992, is a Dutch Baroque ensemble and orchestra specialized in the performance of music from the seventeenth and eighteenth century. Artistic director and conductor is Mike Fentross. Mike Fentross: I was really moved when I heard my orchestra play the opening bars of the Purcell. I heard a sound that was quite different to what I knew from other present-day baroque orchestras. Was this sound closer to that of Purcell's own orchestra, a sound that he may have had in mind when composing this wondrous music? In the very first chat I had about this project with Lidewij van der Voort, our new concertmaster, we talked about the modern adaptations that are often (and understandably) applied to baroque instruments nowadays, and about the possibility of going back to authentic strings (completely bare gut) and a 17th century bow hold (the French grip) for this Purcell project. As it happens, I'd had a similar conversation not long before that with Lidewei de Sterck, our principal oboist, about authentic reeds (scraped from the inside) and with Graham Nicholson, about 17th century trumpets (natural trumpets with no finger holes). These aspects, seemingly just details, have a major impact not just on the sound but also the way of playing and therefore on the way we interpret the music. We all felt the need to record this CD with these 'experimental' instruments. An orchestral sound with so much transparency and colour, a way of playing with such narrative power! I'm full of admiration for the musicians who played so beautifully and who were prepared to take up the challenge of moving away from a well-trodden path.
Recording: Alfred-Krupp-Saal, Philharmonie Essen, Germany, December 6th 2017