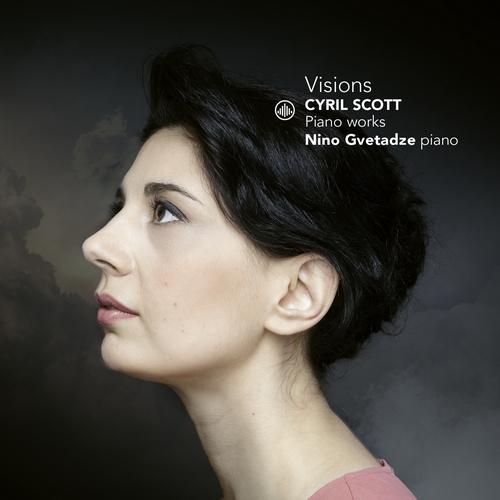 Berceuse
Poems
Lotus Land, Op. 47/1
Water - Wagtail, Op. 71/3
Sphinx, Op. 63
Intermezzo, Op. 67/3
Summerland, Op. 54
Two Pierrot Pieces, Op. 35
Columbine, Op. 47/2
Three little Waltzes, Op. 58
Impressions from the Jungle Book - Morning Song in the Jungle
Over the Prairie
Nino Gvetadze: “Many years ago, when I studied at the Tbilisi Conservatory in Georgia, I had the privilege to be a student of a prominent Georgian composer, pianist and pedagogue, Nodar Gabunia. He was a very special, I would say exceptionally gifted person in many different ways. Every year he would present his students in a special concert that always had a very interesting and intriguing theme. On one of these evenings, this time under the name “Debussy and his contemporaries”, he entrusted me to play Lotus Land by Cyril Scott, the piece that took me under its spell from the very first bars.

This album contains a collection of pieces that will give the listener a glimpse of the atmospheric, rich, beautiful, tender and meditative world of piano music of Cyril Scott. Cyril Scott was a key figure before World War I in helping Britain to break away from musical conservatism and the prevailing Germanic influences.

The album starts with a berceuse and leads us through a night filled with colorful Visions, a night followed by the Morning Song and the wise and dreamy epilogue Over the Prairie.

There is so much more to discover about this enigmatic composer: an ocean of works that he left behind. I hope this CD will awake the interest and will trigger the listeners and musicians to look for more.”
Recording at Muziekgebouw Frits Philips Eindhoven, the Netherlands, 29, 30 April and 1 May 2019