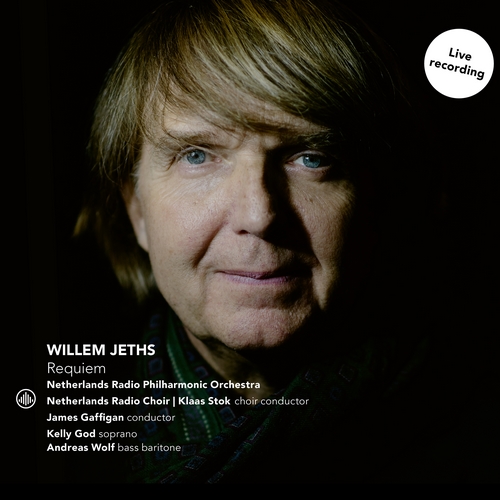 Praefatio
Introitus
Kyrie
Dies Irae
Tuba mirum
Rex tremendae
Recordare
Lacrimosa
Offertorium
Sanctus
Benedictus
Angus Dei
Lux aeterna
Libera me
In paradisum
Death – as a source of reflection, blinding insight or terror – has become an idée fixe in the works of Willem Jeths (born in Amersfoort in 1959). Gradually, death as a topos took on the form of a philosophical question, which perhaps only found its proper place in the Requiem, with the First Symphony (CC 72693) acting as a staging post. There is a link here to a process of increasing awareness, for which Jeths sought the sounds in his second violin concerto. He said: “Death is not the final end but rather a transition to a different phase." This idea is elaborated in the Requiem in the form of a musical journey to the hereafter, taking comfort from beauty and solemn mourning.

Jeths concedes that he had no need for experiments in form, which in this case would have jarred with the intended servitude to his theme. There was no need for a full quartet of soloists; two were sufficient. The orchestral scoring, with double wind and brass, is relatively modest, although Jeths' predilection for exotic colours is evidenced by his use of soprano recorder, harp, organ and an extensive array of percussion instruments including glockenspiel, vibraphone and xylophone. This time, however, they serve a higher purpose, namely the melody. "This is my most melodious work" says the composer. The Requiem must come from the heart and the heart sings.
Recorded at The Royal Concertgebouw, Amsterdam, the Netherlands, 11 March 2017.