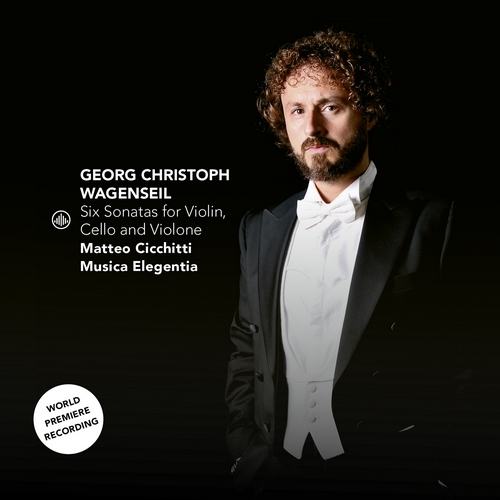 Sonata I
Sonata II
Sonata III
Sonata IV
Sonata V
Sonata VI
The path traced on this CD, with music by Georg Christoph Wagenseil (1715-1777), and on following ones has the undoubted merit of introducing us to some composers considered “minor” compared to Haydn and Mozart. They were not only very active and influential on the musical life of that time; they also created a considerable amount of quality music, which deserves to be rediscovered and appreciated. In a historical-musical perspective, the music of these less famous authors helps to reconstruct the passage between the decline of the Baroque, towards the middle of the eighteenth century, and the noon of the classical style. A period that we often classify as ‘pre-classical’ or ‘galant’ or ‘early Viennese school’. This praiseworthy cultural operation, aimed at rediscovering not only “minor” composers but also certain genres considered “domestic” music allows us to better understand how the “musical landscape” looked like, especially in Vienna. Domestic music responded to the desire for cultured entertainment not only for the aristocracy but also for the rising bourgeois class; and as such, it constituted an indubitable status symbol.

The six sonatas in trio on this CD, dating from around the 1750s can be ascribed to the genre of ‘divertimento’: before 1780 the term was all-encompassing, and included all non-orchestral instrumental music, including sonatas and quartets. Above all, the idea of “musical conversation”, or dialogue or discourse between the different instruments, is very present in this type of composition, in which a pleasant and well-regulated lounge conversation is simulated and sublimated with just the notes.

The collection of Six Sonatas, presented on this CD, from the early fifties of the eighteenth century should be placed among the first chamber documents for three independent strings, without the support of a keyboard instrument for the realization of the continuo. The instrumental ensemble in these Sonatas almost reflects the vocal pattern of a trio between soprano, tenor, and bass, where the two upper voices interweave a duet, and the low one sustains, controls, points out, intervening here and there with short cues.

In general, in these “divertimenti-sonatas” there is a sure hand in managing the polyphonic dialogic interweaving as well as the shape of the form, mixed with a pretty good standard of melodic invention, always inserted in a rigorous and at the same time smooth structure. And this happens all the more in the performance of Musica Elegentia, which aims at enhancing the idea of inter-instrumental dialogue and the individuality of the three instruments, as if they were interlocutors in conversation. These Sonatas are exquisite testimonies of the middle age between Handel and Bach on the one hand, Haydn and Mozart on the other.

Studies on performance practice have shown that in Viennese and Austrian circles the use of the violone as “bass” was very frequent, at least up to a certain date. Joseph Haydn himself indicated only “Violone” in his scores until 1772. The violone in this epoch was considered the “true” bass of the string family. The three instruments are always well identified, and you can always grasp the individual lines: the main melody as well as the embroidery, the foreground as well as the background.
Recorded at SS. Salvatore Church “Santuario del Beato Roberto”, Salle (PE) Italy, August 2020