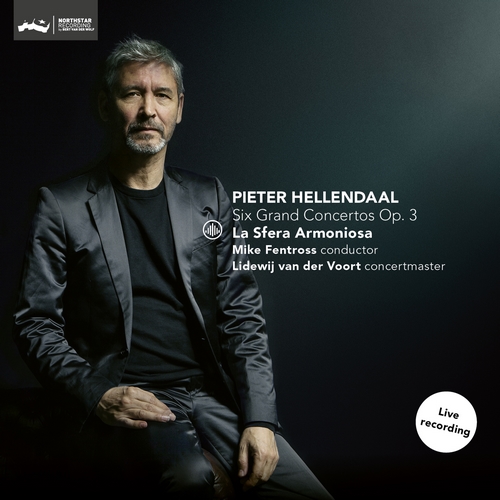 No wonder, then, that also foreign composers living in England were inspired by the work of the big three and continued their formula for success. Among these continuators (which sounds better than followers) Pieter Hellendaal must be counted.

Hellendaal was born in 1721 in Rotterdam as the son of a candle maker. Around 1740 he was in Padua for a while to be trained as a violinist and composer with Giuseppe Tartini, Europe’s most famous violin teacher. Hellendaal then settled in Amsterdam, nevertheless chose to leave for London in 1751, presumably with the hope of greater fame and income.

The London period lasted from 1751 to 1760. His Six Grand Concertos were issued in 1758 by the London music publisher John Walsh. Later, in Cambridge, Hellendaal was appointed organist of Pembroke Hall Chapel in 1762 and he would spend the rest of his life, a time span of almost forty years, in the city. He died in 1799, aged 78.

The Six Grand Concertos of 1758 are his only known works for orchestra. The characteristic of such a ‘grand concerto’ – a translation of the Italian concerto grosso – is the distinction between solo and tutti parts. In Hellendaal’s Grand Concertos there are four soloists, two violinists, an alto player, and a cellist, who together form the concertino.

Hellendaal certainly took the work of his three illustrious predecessors Corelli, Handel and Geminiani as a starting point, but he added a completely individual interpretation to it. The result is a set of six masterpieces.
Recorded at St Laurenskerk Rotterdam, The Netherlands (Live recording), October 7th 2021. Lidewij van der Voort plays on an Amsterdam violin by Hendrik Jacobs from the late 17th century.