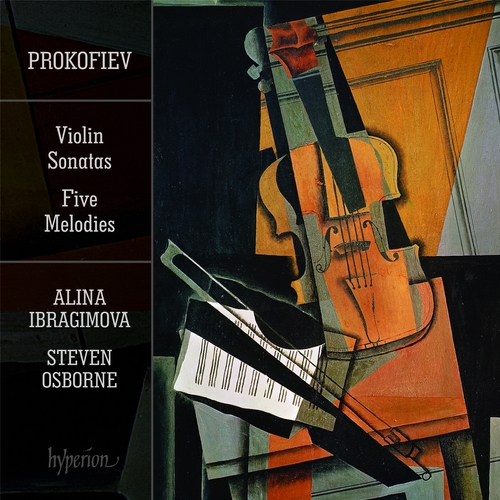 Violin Sonata No 1 in F minor Op 80
Five Melodies Op 35bis
Violin Sonata No 2 in D major Op 94bis
‘One of the biggest joys of the London concert scene in recent years has been the opening up of the musical world of Alina Ibragimova, a world that seems to know no bounds … here she was partnered by Steven Osborne a meeting of minds and talents that had that paradoxical efect, common to the best collaborations, of two strongly contrasted individuals speaking with one voice. The First Sonata really let ?y … quiet but powerfully sustained in the slow music, a fount of uncorked energy in the more frequent fast sections, Ibragimova dug deep into Proko?ev’s aching heart, pro?ling the jagged motifs of the Allegro brusco second movement as vividly as she tore into the syncopated rhythms of the battling ?nale every phrase stamped with conviction and gravitas’ Financial Times

Hyperion is delighted to present a collaboration an extraordinary force on the concert platform in its ?rst appearance on record. Alina Ibragimova and Steven Osborne are musicians of searing, uncompromising intelligence and intense feeling.

In his works for the violin, Proko?ev produced some of his most personal and expressive music. Both of his Violin Sonatas were written for David Oistrakh. The First was begun against the backdrop of Stalin’s Great Terror, in 1938 and one senses that he drew his inspiration from the uncharacteristically dark wells of fear, despair and bereavement which were the lot of Proko?ev and his contemporaries. The Violin Sonata No 2 in D major is of a very different character generally sunny and carefree, though still with occasional ?eeting shadows from the dark world of the First Sonata. In its original form it was a Flute Sonata, Op 94, which Proko?ev had completed in 1943. At David Oistrakh’s suggestion and with his assistance, Proko?ev transcribed this Sonata to create the Second Violin Sonata, Op 94bis.