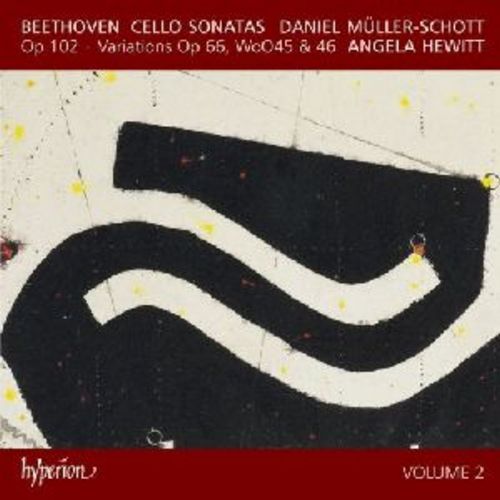 Variations in G major on ‘See the conqu’ring hero comes’ from Handel’s Judas Maccabaeus WoO45
Cello Sonata in C major Op 102 No 1
Variations in F major on ‘Ein Mädchen oder Weibchen’ from Mozart’s Die Zauberflöte Op 66
Variations in E flat major on ‘Bei Männern, welche Liebe fühlen’ from Mozart’s Die Zauberflöte WoO46
Cello Sonata in D major Op 102 No 2
The mercurial partnership of Angela Hewitt and Daniel Müller-Schott brought ‘overwhelming intensity and emotional gravitas’ to a first disc of Beethoven’s cello sonatas. Here in a second volume they present two more of these groundbreaking masterpieces, together with the composer’s homages to Mozart and Handel works which are equally important additions to the cello repertoire. Hewitt’s characteristic digital dexterity and deep understanding of the classical style and Müller-Schott’s vibrant playing combine to create performances of great energy and sensitivity that will delight their many fans. In a fascinating booklet note, Daniel Müller-Schott explores the evolution of Beethoven’s works for cello from a musician’s perspective, describing their revolutionary power and demonstrating the composer’s multifarious imagination [‘Mannigfachphantastische’]. ‘The dynamic duo find overwhelming intensity in this music, in a performance packed with detail and emotional gravitas’ (Classic FM Magazine) ‘Daniel Müller-Schott and Angela Hewitt give Beethoven’s first three cello sonatas a nimble and colourful outing … their duo engagement is compelling and their repertoire of gestures … is exceedingly broad … the recorded sound is beautifully balanced’ (Gramophone) ‘The success of this duo partnership is very evident in this first volume of Daniel Müller-Schott and Angela Hewitt’s Beethoven cycle. They respond with imagination and flexibility to Beethoven’s mercurial changes of mood, one moment tender and reflective, then bold and dynamic … a first class release’ (BBC Music Magazine) ‘Müller-Schott’s playing is strong and vibrant … Hewitt brings her characteristic digital dexterity and sparkling articulation to bear … the performances certainly make one look forward to their second disc’ (International Record Review)

THE DAILY TELEGRAPH CLASSICAL CD OF THE WEEK

'Once again Müller-Schott and Hewitt deliver strong and committed performances characterised by great attention to detail and wonderful musical interaction. The three sets of variations are projected with charm, elegance and virtuosity' (BBC Music Magazine)

'[D major sonata] They project the D major middle section as the ray of light it is. Then they excel in projecting the final fugue clearly, while giving free rein to its sharp cross-accents and registral leaps. Here, Müller-Schott brings a steely intensity to his high passages and an effective growling colour to those down below, while Hewitt deploys her Bachian expertise to advantage, yet conveys Beethoven's counterpoint as pianistically spikier and more rebarbative' (International Record Review)

'Absorbing interpretations, where the two players instinctively click and the music comes across with vibrancy, sensitivity and a galvanising unanimity of purpose' (The Daily Telegraph)

'Müller-Schott is certianly one of the finest cellists before the public today, and this is his core native repertory. The performances have the winning freshness of rediscovery' (The Sunday Times)