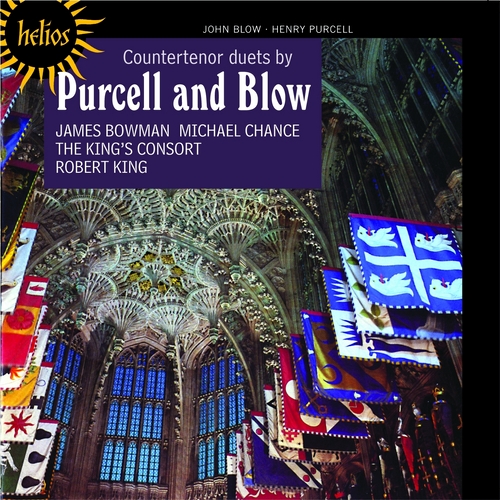 JOHN BLOW:
Ah, heav’n! What is’t I hear? [3'22]
Ode on the death of Mr Henry Purcell [22'05]
This recording of duets by the great composers of the Restoration is one of the gems of Hyperion’s catalogue. It features the celebrated countertenors James Bowman and Michael Chance at the peak of their powers, and the combination of their two voices with the sympathetic accompaniment of The King’s Consort creates something uniquely glorious.

Purcell was a countertenor himself and in his writing for the voice produced some of his most felicitous music. John Blow, Purcell’s predecessor and successor as organist of Westminster Abbey, reached his compositional zenith with the extended duet (almost a small cantata) on the subjects of Purcell’s tragic early death and inextinguishable in?uence.

‘A sparkling collection which shows both the composer and these ?ne artists in inspirational form. The performances are joyous, witty and ravishing in their Purcellian melancholy’

(The Penguin Guide to Compact Discs)

‘A disc no baroque music anglophile will wish to be without, for it is a vocal tour de force’