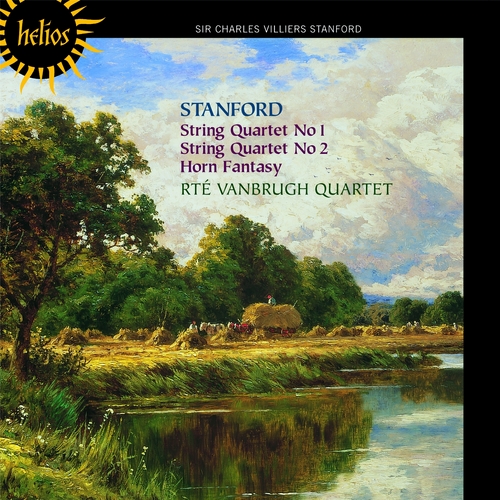 String Quartet No 1 in G major Op 44
String Quartet No 2 in A minor Op 45
Fantasy for Horn Quintet in A minor
Think of Stanford and the genre of the string quartet probably won’t come to mind. But he composed no fewer than eight such works over a twenty-eight year period, inspired by his friendship with the great violinist Joseph Joachim. Stanford had already composed a number of large-scale chamber works before he began his ?rst string quartet in the summer of 1891, when he was thirty-nine; the second string quartet followed immediately during a burst of dazzling creativity. Both quartets are serious, big-boned works that show Stanford’s mastery of the idiom and ability as a contrapuntist, although they generally display textures that are lighter and more transparent than the thicker palette of Brahms (with whom Stanford is sometimes compared). These delightful works also reveal Stanford’s love of song and lyricism. Throughout, the RTÉ Vanbrugh Quartet plays with a rare sensitivity and a natural eloquence.

The Horn Fantasy a later work, dating from 1922 is dramatic, compelling and ?awlessly written for the genre (a rare combination of instruments and quite possibly composed as a tribute to Mozart, whom Stanford greatly admired), and it is superbly played by Stephen Stirling.

All works are here recorded for the ?rst time.

‘These exemplary ?rst recordings make the best possible case for all this rare material; sound and balance are ?rst-class, too. A strongly recommendable issue, in sum, extensively annotated by Jeremy Dibble. Can we expect further instalments?’ (Gramophone)

‘These beautifully crafted and attractive string quartets, clearly indebted to Brahms and Mendelssohn, receive highly committed performances. The Fantasy for Horn and String Quartet, one of Stanford’s last compositions, proves to be an unexpected bonus’ (BBC Music Magazine)

‘Jeremy Dibble’s notes are excellent, as is the recording. On balance, this is a very worth-while issue of ?rst-rate British chamber music which does not deserve the neglect which has befallen it’ (International Record Review)

‘This is ?ne music, beautifully played’ (The Sunday Times)

‘These two quartets are alive with melodic invention and supremely crafted …Stephen Stirling is a sweet-toned soloist alongside the consistently stylish playing of this ?ne Irish quartet’ (Classic FM Magazine)

‘The string quartet writing here reveals the composer at his most fecund and imaginative. The highly adept RTÉ Vanbrugh Quartet, which hails from Stanford’s native Dublin, brings a terri?c energy to these appetising works’ (The Strad)

‘The playing on this new Hyperion release is ?awless, and their tonal palette perfect for Stanford’s music. Stephen Stirling’s horn in the Fantasy is warm and glowing. This is very highly recommended, and with a plea to the Vanbrugh and Hyperion for Stanford’s remaining six quartets’ (Fanfare, USA)